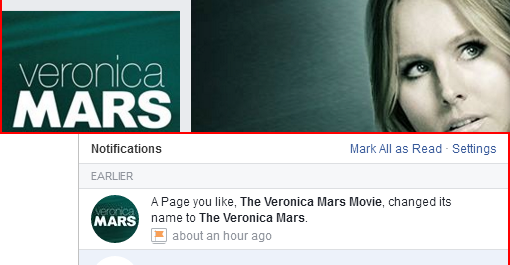 But what does it mean???

We asked ourselves the same question, and – maybe it’s wishful thinking but – it sounds like they’re renaming to make the page more inclusive, to allow information and updates on more than just the movie that came out four years ago (has it really been that long?!).

Another solid question, Marshmallows. Maybe it’s just because there’s no more reason to update on a movie that came out four years ago, but since it’s already a legitimate and verified Facebook page, they figured, “Why not both?” But, the wistful, wishful Marshmallow in us says it’s more than that.

To distinguish itself from Veronica Mars (2004-2007) the series, everyone – including the Powers That Be (i.e. the cast, creator, Facebook page updater guy) referred to the movie as “The Veronica Mars Movie”; so to show it is a continuation from the movie and not the original series, they’re keeping the “The.” Or maybe it’s a rights thing? Like, is it easier to put a show on Netflix or Hulu if it doesn’t have the same title as a previously existing show on a TV network, and thus to circumvent this they’ve changed the name ever so slightly. We are all for loopholes if it gets us closer to more of our favorite tiny blonde one, Veronica Mars!

Anything for more Veronica Mars.

They’ve always told us more was coming. The only question was, “WHEN?” In the words of Kristen Bell, Veronica Mars herself, “So we want to do a miniseries. We are willing to put the effort in. I mean, if I have to do it as Murder, She Wrote at 80, we’re going to do it. It’s going to happen.” We may finally have our answer, that it will be far sooner than that.

Sounds good to us.