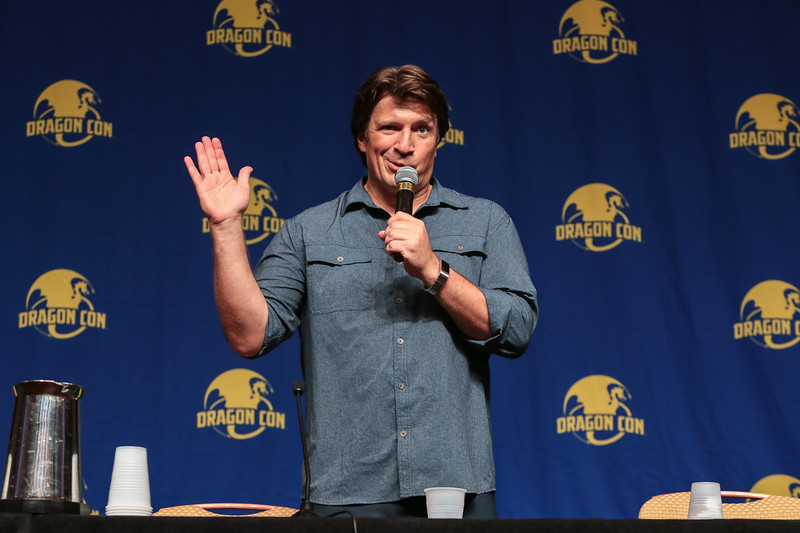 I’ll admit it: I’d never seen a single episode of Con Man. But when we missed the first of Nathan Fillion‘s only two panels at Dragon Con, we knew that we couldn’t miss the second, even if it was a topic we weren’t too familiar with. And from talking with other fans there that day, it became clear that there were more than a few people in that panel room in the same boat.
It didn’t matter one bit. (And it was surprisingly lacking in spoilers, so new fans can enjoy hearing Nathan Fillion talk in the same room as them AND still enjoy Con Man spoiler-free!)
Fillion started off the panel by welcoming his friend and fellow Con Man cast member, Casper van Dien, to the panel. Casper acted as the moderator for the panel, and he did so in a style rarely seen at Dragon Con. Rather than have fans line up behind a volunteer to ask questions, Casper looked for raised hands and sprinted around the room to get their questions. Also unlike most Dragon Con panels, Nathan Fillion made this one more personable by not sitting behind a table with his name card and a pitcher of water between him and his fans.

The first question was, of course, a Firefly question, but with Fillion’s encouragement the panel stayed surprisingly Con Man-centric. Given Fillion‘s extensive body of work, the panel easily could have gone anywhere from Firefly to Guardians of the Galaxy to Two Guys and a Girl to Buffy and Waitress, and beyond; and while there were a few discussions of Fillion‘s (and Van Dien’s) soap opera days, the panel mostly stayed on topic. The room applauded when the announcement was made that Con Man would be coming to SyFy while still being controlled creatively by its creators.
Nathan Fillion has charisma, there’s no doubt about it. At Dragon Con he just reminded us all of that fact and invited a packed-to-capacity room to join his family. Of course we all agreed.

Enjoy the full panel below!
https://youtu.be/Hp8j0sBRtrw