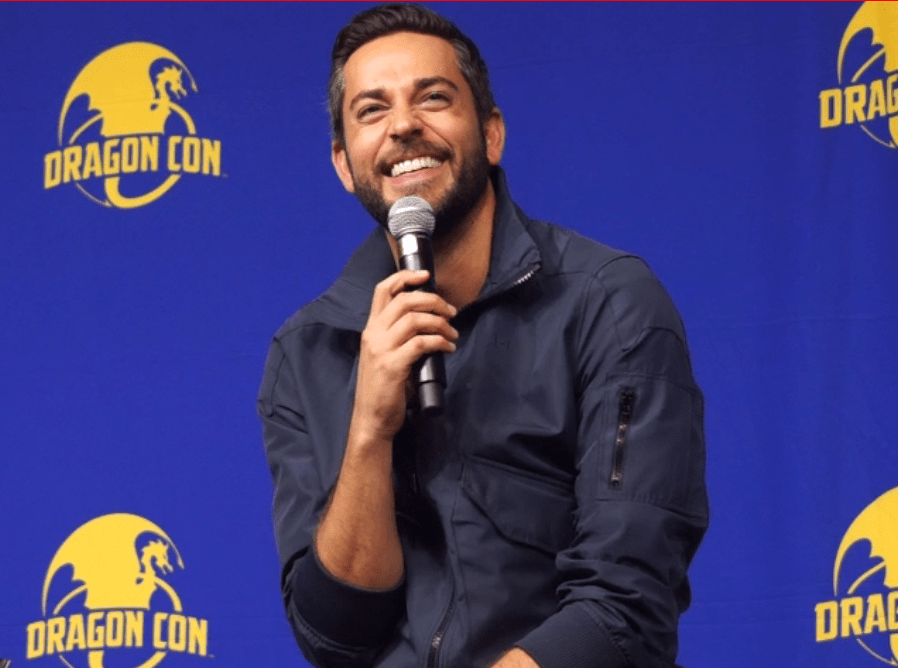 I’ve enjoyed everything I’ve seen Zachary Levi act in. I even enjoyed the Heroes revival. Fight me. Until Dragon Con, though, I didn’t know much about the man himself. With the bits and pieces I’d gleaned from special features on our Chuck DVDs and from Nerd HQ panels, I figured he must be a good guy. After attending his Sunday panel at Dragon Con I can confirm: “a good guy” is an understatement.
Albeit, he’s a good guy who could not sit still or in one place for long. Zachary Levi sits where he wants – as you’ll see in the video below. This is part of what made him so engaging to watch, though, so we promise the 30 second readjustment period, repositioning the camera to frame him correctly, is worth it. Plus, you get a great crotch shot, and Zachary Levi commentary on the “manspread”, if you’re into that.
https://www.youtube.com/watch?v=gezhhq8VC0A
Of course Zachary Levi was charming. That “childish wonder” and goofiness from Chuck clearly wasn’t something he had to learn. When one attendee apologized for having short legs (Levi couldn’t find her in the crowd when she started to ask her question), Levi told her not to worry about it because he has “long enough legs for both of us.”
Of course he was witty and clever. When a (totally adorable) child asked if he’d rather be Eevee or Teddiursa, Levi looked to the crowd for an answer then quickly delivered it, assuring the boy that it was the obvious choice. He shared his theory that the only reason anyone watched Chuck was for Adam Baldwin because “he’s still so SHINY!”
What was surprising, though, was how HEARTFELT he was. More than once he found himself fighting back tears as he talked about those less fortunate than him and how badly he wants to help them. This wasn’t your average, “I’d wish for world peace” level of caring; this was caring on a whole different level, a level rarely seen at all, let alone from Hollywood celebrities.
Zachary Levi is everything that is right with the world. When someone joked about wanting to “meet” his Chuck costar Yvonne Strahovski and asked him for a good way to break the ice with her, Levi was quick to say, “Well, she married, so . . . I respect the sanctity of marriage, my friend.” When asked about the future of Nerd HQ, which he funded himself to give fans the chance to talk candidly with their favorite actors and creators for charity FOR FREE, Levi revealed that he had actually been losing money in the endeavor and he couldn’t afford to keep pouring money into something and giving it away for free, and that when he tried crowd-funding it last year, he had to call it a quits for now due to lack of supporters. When asked about bringing Nerd HQ to Dragon Con, his response was hopeful: “You can make it happen.”
The most heartwarming (and heartbreaking) part of the panel, though, was listening to Zachary Levi talk about his dreams. The man has no selfish dreams that he spoke of, unless you count finding true love and support in another person, both giving and receiving, selfish. He wants to help everyone, and to be honest, he’s got some good ideas on how to do so. He was quick to point out that he has no problem with making lots of money; he just recognizes that there’s a point when a person has more money than they could ever spend, and that it could be used to help those without. With literal tears in his eyes, Levi shared his hopes for a better world.
He ended his time with us with so much gratitude to the fans for their love and support.

This wasn’t an average Dragon Con panel. This was a good man with a great heart who just happens to be famous, sharing his vision for a brighter future for EVERYONE. Is it too soon to say Levi for President 2020?