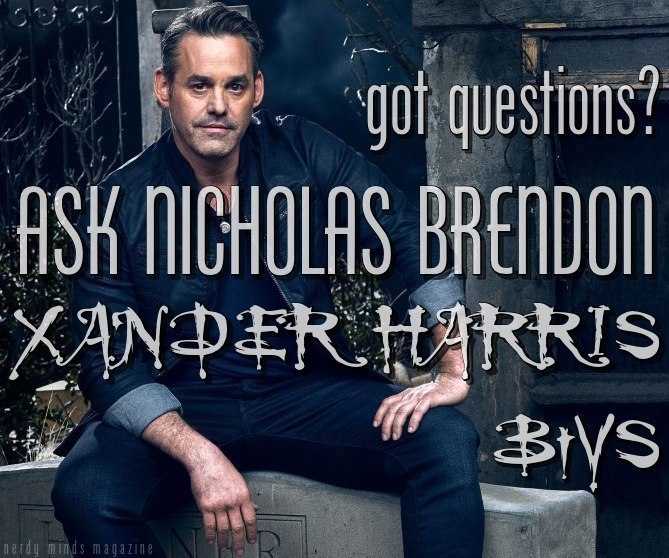 Xander Harris is one of us. He’s a nerd, and he has fun with it. He’s been the one who talks too much, who doesn’t get the girl, who eats insects and gets the funny syphilis… Okay, so we may not relate on all counts, but we love Xander Harris – and we love the man behind him, too.

Nicholas Brendon is best known for his role as lovable dork Xander Harris on the cult classic television show Buffy the Vampire Slayer. This weekend, we have the exciting opportunity to meet and interview the man behind the butt monkey*, and we’re asking your questions!

After a series of not-so-subtle hints published by the actor on Twitter last week, we published an “investigation” into Brendon’s upcoming weekend plans, with our fingers crossed for Dragon Con. He has since confirmed his appearance at the event, noting he is “going rogue” this year (this means he’s not on the event programming, so find out where to find him for selfies and autographs this weekend by clicking here), and scheduled an interview with Nerdy Minds Magazine.

We’ll be asking our own interview questions as well as questions from the fans, so now’s your chance! Want to know if he’s a boxers or a briefs kind of guy? Well, I don’t know if you’ll find that out this weekend (especially if you don’t ask), but you can bet your own sweet monkey butt that you’ll get to know Nicholas Brendon in a way you haven’t had the opportunity to before.

Xander: Your English is very bueno.
Ampata: I listen much.
Xander: Well, that works out well, because I talk much.

We hope so, Nicky… because we’ve got questions!

*We’re joking about the butt monkey part – of course we know he’s finished being everybody’s butt monkey… But we’re not kidding about the interview, so submit your questions now or forever live with the burning questions in your soul.