There’s no greater joy than seeing actors who genuinely love the world in which they work. This definitely can be said about the cast of The Flash, some of which (John Wesley Shipp, Candice Patton, Danielle Panabaker, and Robbie Amell) we had the pleasure of being in the same room with. During this Q&A, these actors didn’t just regurgitate answers they’d given a million times or list information. They were passionate, sharing anything they were allowed to with joy and excitement. From new characters to favorite foods, the quartet charmed the packed room for an hour. Didn’t make it to the panel yourself? No worries, we’ve got you covered.

John Wesley Shipp, the oldest actor on the panel, shared stories from his run as Barry Allen and how it has influenced his portrayal of Barry’s father. While we knew about his history in the universe, it didn’t really occur to us until Shipp pointed it out that he “was where Grant is right now.” Grant Gustin has a unique mentor in Shipp that not many actors have, and Shipp seemed more than pleased to be able to work with someone who was essentially following in his footsteps. In addition to speaking highly of his new costars, he also reminisced about reuniting with an old friend: Mark Hammill. Hammill appeared in Season
One of The Flash as The Trickster, a jester-like criminal that had been locked in prison for years. A “new” Trickster was introduced, forcing the Flash team to consult with Hammill’s character to outsmart his copy-cat. Shipp mentioned Hammill’s concern of, “I could barely work the unitard twenty-five years ago!” When asked about any upcoming references to Green Lantern, Shipp quickly clapped both hands over his mouth. Luckily for us, the other actors were a little more giving with their classified information.

As the actress behind Barry Allen’s principle love interest, Candice Patton had quite a lot that she couldn’t say, but she shared everything that she could. She opened up about her thoughts on the inevitable Barry/Iris relationship and how it might seem awkward given their upbringing almost as siblings. “It’s never really been a weird thing to me,” she said when asked by, not joking, a church minister if it seemed weird. “They’re not in any way related. We’ve made that very clear with Iris being black and Barry being white,” she told the room, and the room responded with an uproar of laughter and cheers. “Us potentially getting married and having children is okay by your God.” She showed that she doesn’t just take the character that she’s given and copy it; she takes that character and understands her and why she does what she does. When asked how it feels to come to work each day knowing that she’s going to “break Barry’s heart”, Patton responded, not with a joke, but with a step into the mind of Iris West and the reason she acts the way she does. She was also more than excited for upcoming characters in Season Two. She specifically mentioned two more additions to the West family, Wally West and Iris’s mother. Also mentioned were two new speedsters, Jay Garrick and Professor Zoom who Patton mentioned with a fangirl shriek of, “ZOOM!” 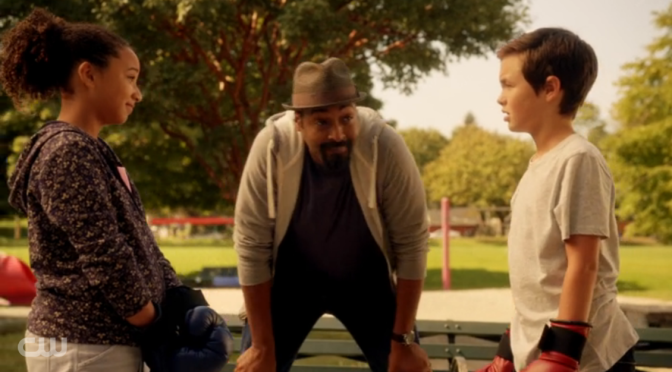 As the only “full time” member of Team Flash on the panel, Danielle Pannebaker had a wider range of ground to cover regarding her character but also the team for which she works. She showed that she doesn’t only focus on her character but also focuses on the characters around her and how they fit into Caitlin Snow’s life. Of course, the big question on everyone’s mind was about Snow’s alter ego in the comics, Killer Frost. Of course, with the new season just around the corner there was only so much that could be said, but Pannebaker responded that the transition to the DC villain would be a “slow burn.” When
asked if Killer Frost and Firestorm could continue as a couple with such drastically different powers, Pannebaker and her costar Robbie Amell both voiced that they were confident that they’d be able to work things out and definitely wouldn’t go down without a fight.

Robbie Amell was the only one to shed light on the Green Lantern universe and it’s role in the show, saying that “there will be time spent there [in Coast City] on Arrow.” Ever the entertainer, he also shared the magic behind Firestorm’s flashy takeoff scene, demonstrating a “jump up then run off camera” method for creating the effect. He spoke about his excitement and terror about working with Victor Garber and having to play a character with Victor’s character in his head. Robbie charmed the entire room when responding to a young fan’s question about his character’s love for pizza. “You have the best questions,” he responded. “I do, actually,” he admitted and proceeded to share his personal favorite pizza places and toppings.

Of course, the panel revealed more information than that, but this article would never end if we listed every bit of information that we heard. Why not check out the full panel YouTube?

Don’t forget to look up the actors on Twitter to let them know you love what they’ve done so far and that, like the rest of us, you want more. Let them know @NerdyMindsMag sent you!