You should know him because of his new film and directorial debut, Beside Still Waters.

What’s Beside Still Waters? We’re glad you asked…and we’ll let him tell you! We had the chance to sit down with Chris Lowell and his writing partner, Mo Narang, this past weekend, and you can listen to the whole thing below! We made it listen-only so your boss won’t know you’re slacking (you’re welcome). Just put your headphones on, and you’re home free!

Oh, and it should be noted that there’s a little something in here for everyone! Chris and Mo talk about Beside Still Waters, Enlisted, Veronica Mars…even Firefly. So whether you’re Team Piz (Veronica Mars) Team Derrick (Enlisted), Team Dell (Private Practice), or Team Chris Lowell in general…you will enjoy this interview!


Later that evening, Chris and Mo shared their deeply personal, moving–and hilarious–film with us at the Atlanta Film Festival. Beside Still Waters is a love letter to the Georgia lake house where Chris grew up and where he learned about life and love. It’s a love letter to best friends and “the good old days”. It’s…definitely worth watching. And even more than that, it’s worth making happen, which you can be a part of! Much like Veronica Mars fans rose up to raise funds to get something important to them on the big screen, Mr. Chris Lowell is asking you to do the same for something near to his heart, Beside Still Waters. You can help by backing with as little as $1 on Kickstarter…and even at the lower backer levels, you get some pretty epic swag (is swag still cool to say? Was it ever?). For a totally worth-it amount more, you can get a whiskey slap shirt! 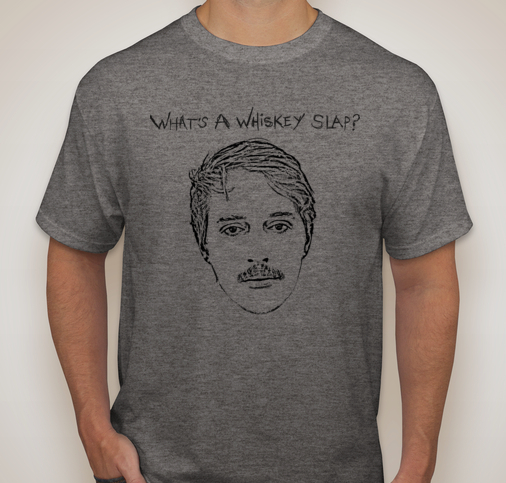 Well, they told us in the interview (above), but just in case you missed it…

This is a very stupid game we play. . . We were passing around this bottle of whiskey with a chaser. We ran out of our chaser . . . and my friend Lindsey said, “Well, just take a shot; I’ll slap you across the face. It’ll take the sting of the whiskey away.” . . . We all did it, and then that became sort of a token party game. Before we’d go out and hit the town, we’d hit each other. –Chris Lowell

What do you mean we can help make the movie happen? Didn’t you say you’ve already seen it? Isn’t it already made? Yes, it is already made…but you can’t enjoy the film if you can’t see it–and you want to see this film because you will enjoy it. The money they’re raising is for distribution. It’s to get this movie into the hands–and hearts (seriously, it’s emotional)–of others. And theatres! If they raise enough money, you could see this masterpiece on the big screen, which from personal experience we can tell you is an opportunity you want to take if you can. So, what are you still doing here? Go back Beside Still Waters already!

You can click here for a spoiler free review of Beside Still Waters.

Thanks, Chris and Mo! We’re glad you’re in this world because not only are you seriously cool dudes, but your creative minds are a great gift to it. You both rock somethin’ fierce, and Georgia misses you already.

Stay tuned to Nerdy Minds on Facebook and @NerdyMindsMag on Twitter for even more nerdy news, deals, top 10s, reviews, and interviews (etc.) coming soon! You can even subscribe to have each new post delivered straight to your inbox; simply scroll to the bottom of the page (yes, all the way down) and opt in (it’s easy and totally worth it so you’ll never miss another post)! And we won’t totally hate it if you share/tweet/stumble/tumble/pin/post to Reddit (etc.) our stuff (it helps keep us on the web, so thank you in advance)! If you’d like to write something to have published on our site or if you’d like to see us cover something specific, you’re encouraged to take a quick look around to see if we’ve done it already…then contact us with your ideas! We’d love to hear from you!

4 thoughts on “An Interview with Chris Lowell on His New Film, BESIDE STILL WATERS + VERONICA MARS, ENLISTED, the Whedonverse…and More!”