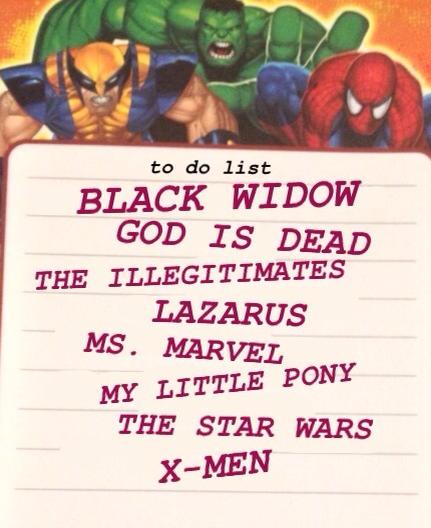 Hello, comic friends! I am here to discuss comics that will be released this Wednesday, February 5th, 2014.

“The Finely Woven Thread – PART 3: ‘FOLIAGE’. She’s the kind of woman you call when you need to escape from a South American prison. Don’t miss the book everyone is talking about (and it isn’t even out yet!)”

This book has been well-prepared for release considering we are already on issue three for a series that started last month. I enjoy giving my attention to a series that focuses around a strong female character, and this is definitely panning out for me. The art is beautiful. It’s so beautiful that I want to have every panel as a full size poster, and I have never said this about a comic book before.

“The battle of the gods is over and one stands supreme above all of the world. This is truly the end of days… until the gods of humankind are born and rise up. From the very DNA of the gods, man has once again taken pride and hubris to the very brink. Three who would formerly oppose the gods as mortals now walk as the divine. And they must use their newfound divinity to battle the very god of gods. JONATHAN HICKMAN’s unique vision of a world literally facing divine destruction brings its first chapter to a close with the most shocking of endings.”

Three issues into this series I knew I wanted to read this as a whole, so I’ve been purchasing them and setting them aside. I avoid reading what I copied and pasted above from the Midtown Comics website, but I do know this is the end of the first chapter. Originally this was supposed to be a 6-issue mini-series, and I was happy with that. It’s success has brought more life into the book, and we will be getting more issues. After I read this first story arc, I’ll make the decision to carry on because I actually liked the idea of it’s definite final story at first. I follow a lot of series, so it’s great to pick up things that I know have a beginning, middle and an end. If it’s great… I’m sure I will be sucked in for more. Time will tell. 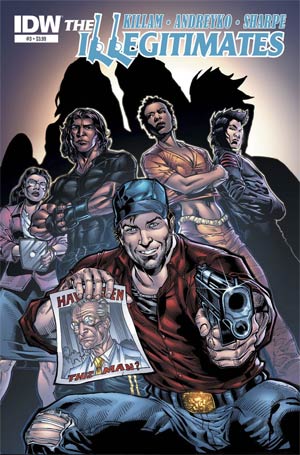 “The Illegitimates strike out on their first mission as a team! Dannikor’s plan revealed! Mom’s in peril! And, WHO is the mole in the OLYMPUS organization? Spy-jinks galore as things get messy!”

I am really enjoying this mini-series so far. One of the best secret agents has been killed, and his illegitimate children have been contacted and trained to take his place. It’s a fresh take on the secret agent genre that always seems very cookie-cutter to me.

“LIFT, Part Two: While Johanna continues to try and rehabilitate her image and prove her loyalty to the Family, Forever investigates rumors of the Freemen Resistance in Los Angeles. In Montana, the Barrets make a fateful decision, and begin the long journey to Denver.”

A great futuristic series about families with power putting a person in charge, called a Lazarus, with scientifically given skills to protect their family and the community which they control on their land. So far we’ve witnessed a lot of action and treason between siblings, with the guarantee that the creators have a very large story to tell and this is just the beginning. If you like River Tam from Firefly/Serenity and Cameron from The Sarah Connor Chronicles, you may find interest in Forever, the name given to the Lazarus that protects the family that is the focus of this book.

“The legend has returned! Marvel Comics presents the all-new MS. MARVEL, the ground breaking heroine that has become an international sensation! Kamala Khan is just an ordinary girl from Jersey City, until she is suddenly empowered with extraordinary gifts. But who truly is the all-new Ms. Marvel? Teenager? Muslim? Inhuman? Find out as she takes the Marvel Universe by storm, and prepare for an epic tale that will be remembered by generations to come. History in the making is NOW!”

The above description says it all. Another new series about a strong female character that draws extra attention from the fact that the new Ms. Marvel is a Muslim-American teenager. This is one of my favorite covers that I used as my phone wallpaper, hung the promo images and posters on my fridge and various places where you can put things on things.

My Little Pony: Friendship Is Magic #16

“The literary madness continues as the Bookworm burrows deeper into everypony’s favorite books! As more stories come to life, the only chance our ponies will have to save the day is to write their own version of the tale! Can their collaboration get on the same page? Read on!”

This book is very consistent with it’s humor and vibrant colors… and that makes the Ant-Man happy.

“Remember the scene in Star Wars where the Sith Knight traps General Luke Skywalker, Princess Leia, Annikin Starkiller, and the alien Han Solo – and they have to fight their way free and steal an Imperial starship? No? That’s because this is The Star Wars – based on George Lucas’s original rough-draft screenplay! Experience a Star Wars that never was!”

This is part 5 of 8 of the adaptation of George Lucas’s original script for Star Wars. Halfway through this I knew I wanted to read this as a whole so I’ve been banking these issues for when it’s all complete. I was already convinced by the first issue that I wanted the hardcover version if it comes out, because, as a fan of everything Star Wars, this needs to be in my collection.

If you are able to separate yourself from what you know from the movies, and realize that this is how it all started, you may really enjoy the beginning of what became one of the biggest franchises of all time. 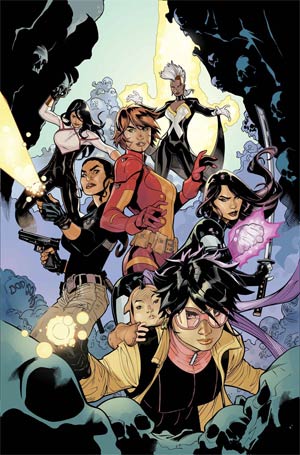 “AN ALL-NEW SISTERHOOD! The X-Men have taken down super villains, aliens and their own future selves… but never all at the same time! Lady Deathstrike has put together an all new Sisterhood, her own illuminati to take down the X-Men and take over the world. Recruiting the likes of Typhoid Mary and Enchantress, her cabal go on a global hunt for the most powerful of them all… an enemy who holds the X-Men responsible for her almost-destruction. Meanwhile, M settles in and Rachel comes to terms with her relationship with Sublime.”

This specific X-Men book, with no adjectives attached to the title, focuses on a female cast of our favorite mutants.

My podcast, Ant On, is available on iTunes (with a link below this post), and I do several episodes focused 100% on comic book previews and reviews. I also do a comic book segment on my first podcast, AB Conversation, in which I will highlight just a few of the books, leaving reason to check out the Ant On Comics podcast as well for the full feature. The AB Conversation covers movies, television, comics, video games, food and the internet every Sunday morning. Episodes 17 & 18 of Ant On I sat down with my friend, Tyler, and we discussed our general love for comics and how we got into them. It’s a great origin story of my passion for this medium of storytelling.

My podcasts on iTunes: “AB Conversation” & “Ant On”