On January 10, actor Peter Mayhew, most famous for portraying Chewbacca in the original Star Wars films, dug into the vault and posted several old photos from the set on Twitter.  Looking at them was a great nostalgia trip for me, as it conjured up some great memories of my first viewing of the original trilogy in 1997, when the Special Edition films debuted in theaters (I could write a whole post on why I believe those are the best version).  While it was entertaining to see these photos, I think many of them offer some insight as to what it was like on the set of the original trilogy.  You can see the complete set in this Huffington post article, but I thought I’d dish on a few of my favorites here.

I don’t know why, but this photo really makes me laugh.  Harrison Ford has always struck me as a somewhat serious actor (even though he has plenty of laughs in the SW trilogy), so to see this side of him is entertaining.  Also… check out the sharp resolution in this one.  This is supposedly from the 70s, and I know many digital cameras that don’t take shots this good. 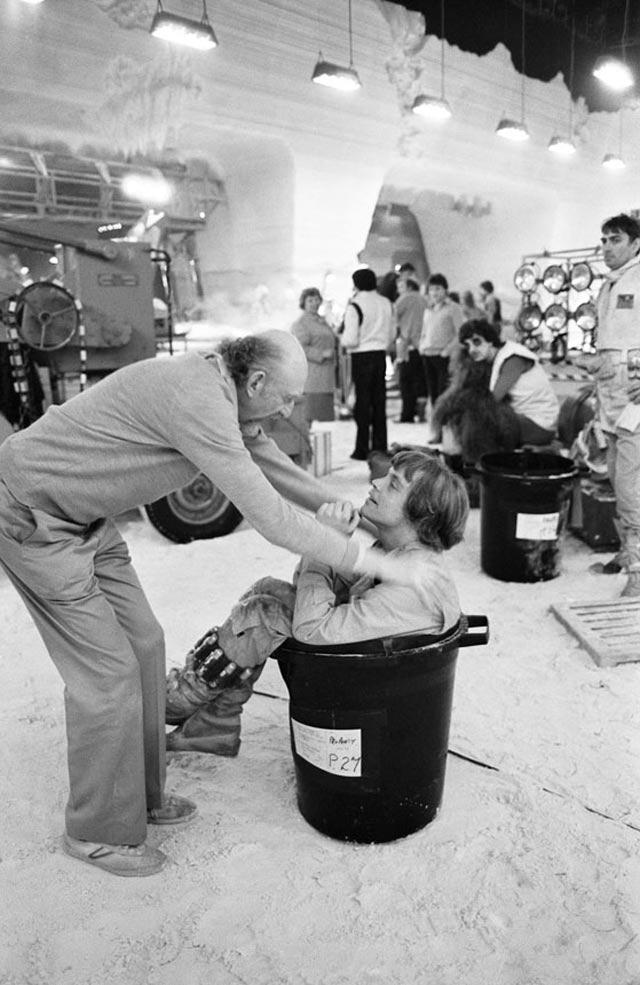 I guess Mark Hamill is smaller than I thought… never thought he could fit in a container that small.

Okay, more Carrie Fisher highlights to come here, but I am quite jealous of Mayhew right now.  Side note: Carrie Fisher made a brilliant one-woman show recently called Wishful Drinking, and any Star Wars fan needs to check it out.  She may not be the skinny, alluring Leia she once was, but she has a sense of humor as quick as lightning.  One of my favorite things I heard her say was during a lifetime achievement tribute show for George Lucas: “…and in conclusion, I just want to say congratulations George, and I hope I slept with you to get that part.  Otherwise, who was that guy?!”

What’s the only thing sexier than one Slave Leia?  Why, two, of course!  I don’t think this one needs any further comment.

I can only imagine how sweltering that C3PO costume must have been in the Tunisia sun.  Fun fact: Anthony Daniels is the only actor to have appeared in every single Star Wars film, even that crappy Clone Wars film no one remembers. 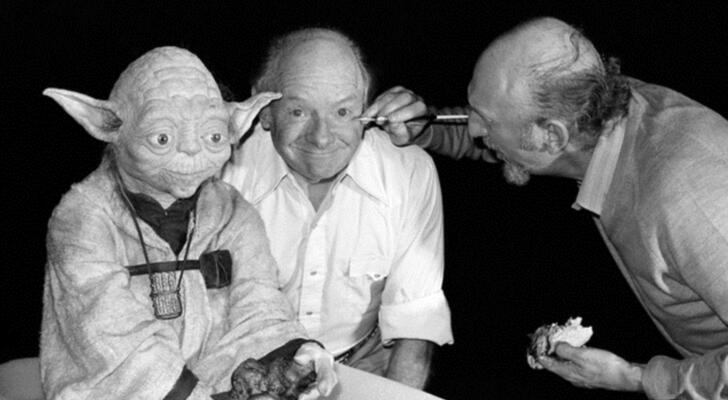 Yoda and his designer Stuart Freeborn getting their makeup done.  I love that Stuart has pretty much the same look on his face as Yoda.  Freeborn is often thought of as the father of modern make-up design in films, and worked on many prominent ones (such as the Superman movies, 2001: A Space Odyssey, and Dr. Strangelove) until his death in February 2013 at the ripe old age of 98.

It really is a treat to see behind the scenes of classic films, and Peter Mayhew really delivered with these pictures. What is your favorite shot?