Until last week, we knew little about The Hunger Games. We knew that it was an action movie based on a book, that there were at least two more movies coming, and that people loved Katniss and Jennifer Lawrence. Still, it piqued our interest, so when AMC Theaters announced their The Hunger Games Double Feature, we decided to take a risk and check it out. The experience was both incredible and incredibly conflicting. The movies are very well written and equally well made. We loved the characters and the story. We did not, however, have the slightest clue that the movies would be so dark. We thought these were young adult novels like we grew up with. They are not. If you haven’t seen these movies yet, we’ll leave you with two warnings. First, don’t read any more of this article as there are spoilers. Second, prepare yourself to be affected far more by these films than you’d ever expect to be.

Our first impression (the first 5 minutes or so) was that The Hunger Games was good, not great.

It wasn’t great or life-changing, but the beginning of the movie proved to be a nice little film. The setup was good and didn’t spend too long showing us information that could just as easily be picked up by just watching the characters. The characters were likable, if not way too good-looking compared to the rest of their district. I mean, let’s face it, you could tell immediately who the important characters were because they were prettier than everyone else, similar to how the crew of Serenity looked in the movie as opposed to the show. They were still dirty, but they looked like they’d been intentionally dirtied up for some sort of themed photo shoot.

Then it got a little predictable.

We discovered that we were very good at the “Guess What Happens Next” game. Katniss is assuring her sister that there’s no way she’ll be picked? Looks like she’s getting picked. But Prim looks actual dirty and not Hollywood dirty, which means that she can’t participate in the games. Looks like Katniss will step in. They’ve established two main likable characters from District 12? How long until they announce that somehow they’re going to allow two winners instead of one?

Still, there were enough twists and turns to keep us on the edge of our seats.

For starters, the costumes were amazing. Effie may have been annoying at first, but her costumes were glorious. Caesar Flickerman’s suits were equally cool. The tribute costumes for Catching Fire were also pretty iconic; overall, these movies are a cosplayer’s paradise.

Second, the humor was well-placed. Katniss shooting the apple from the pig’s mouth in the first film brought some levity to a frustrating scene. The beginning of Catching Fire was particularly humorous, which served to make the darkness that would come later stand out even more. This was not a funny movie, but humor was used as a tool to accentuate important points in the film (and to keep the audience from needing a prescription of Prozac when the film was over).

The love triangle was also done very well. The movie continually sets Katniss up with Gale then Peeta then Gale again then Peeta again. They are both so likable that we easily forget about whichever third wheel isn’t a part of the current romance. We root for Katniss and Gale until Peeta proclaims his feelings for Katniss. Then we root for Peeta to get the girl until we see Gale’s hurt face when he sees the two of them together. Peeta and Katniss seem destined for each other at the beginning of Catching Fire, but the flogging scene makes us feel for Gale; the scene where Katniss won’t leave his side pulls us back onto the GaleNess camp. At different points we contemplated the fact that she could only wind up with one, which only made us more conflicted.

Then came the unexpected surprises and the nail-biting.

Will Katniss be able to get away from the tracker jackers? She’s got a knife to her throat and literally no one around to help; how will she survive? The poison fog is coming more quickly than they can run; will they be able to escape? Are the blisters from the fog permanent? All of the main characters are standing around a giant tree that they know is about to be struck by lightning, and they’re holding a spool of metal wire that is attached to the lightning tree. Will they all make it?

As we watched the games progress, we realized that no one was safe. Anyone could die at any moment, so when something life-threatening showed up, there was no “they can’t die; they’re too important” reaction. The movies established early on that at least twenty-two people would die in the games alone, so we soon realized that it was always “when this character dies” and not “if this character dies”.

These movies made us angrier than most movies we’ve seen.

We can’t think of many things as frustrating as watching something horrible happen and being completely and utterly helpless to do anything at all to stop it. Catching Fire was particularly good at putting characters in this situation again and again. From the District 11 salute that led to an older man being executed while Katniss fought to save him to watching President Snow’s face while he smugly glared at Katniss just before the “new” quarter quell rules were announced, we were reminded time and time again that the heroes of the film, the characters that we sympathized with and rooted for, were completely helpless to be anything but pawns in the Capitol’s game.

Then came the crying.

Sure, some deaths were predictable. As soon as Katniss started to help Rue during the games, we knew that Rue was a goner. Still, that death scene was more than we had prepared ourselves for. Even deaths of characters we didn’t know very well were tough. Seeing the young boy die almost as soon as the games started was a brutal reminder of how this would all eventually end.

In Catching Fire we saw emotions from Effie that were completely missing in The Hunger Games. She legitimately cared about everyone on the District 12 team and seemed to be disillusioned with the system that the Capitol had put in place. Listen to how she says the line “May the odds be ever in your favor” before the 74th Hunger Games, then listen to how she says it before the 75th; she’s a completely changed character, and that change helps us realize just how much has changed since Katniss and Peeta won the 74th Hunger Games.

Another expected but still brutal death was Cinna’s. His relationship with Katniss hinted that he would be a more important character than simply a clothing designer, and as soon as we saw the mockingjay dress we knew that he was about to meet his end. Still, nothing could have prepared us for how it happened. We almost thought that our guess had been wrong when Katniss entered the tube to go to the arena. Then the tube didn’t ascend. We realized along with Katniss that something was wrong. When the guards entered, we knew exactly what was going to happen and how it was going to happen, and watching Katniss slam against the glass trying to escape to save her friend was heart wrenching.

We knew that Mags was likely not going to survive the 75th Hunger Games. It was hinted at early on that Finnick would likely not protect her if she was slowing him down. Given Finnick’s attitude, we expected him to sacrifice Mags in order to stay alive. Then, not only did Finnick almost die himself trying to save Mags, but she sacrificed herself to save Peeta. Watching Finnick realize what she was doing made us go from thinking he was a total douche to mourning alongside him.

We’re sure (read: we hope) that the final chapter(s) of the Hunger Games saga will have a happy ending, but the first two films left us feeling like we’d just spent five hours getting punched in the stomach but somehow enjoyed it. 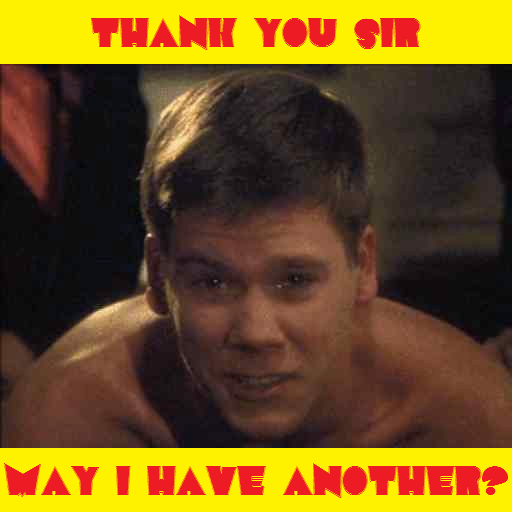 The bottom line? It confuses us a little that we’re saying this, but you should go see Catching Fire. It’s some of the most fun we’ve ever had being beaten around for two and a half hours.

Agree or disagree with our review? Tell us what you think!