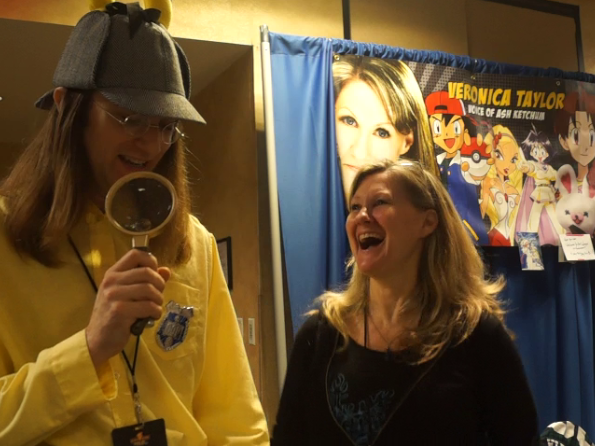 Even if we pretended for a second that you didn’t like Pokemon, you’d at least still be familiar with it. The explosively successful video game turned card game turned anime was an uncontrollable craze in the 90s and has held onto that popularity in the following years. With Pokemon Sword and Shield set to release this November, the hype is ramping up again. And at the heart of the whole thing is Veronica Taylor. Taylor is the original voice actor for Ash Ketchum, the dopey ten-year-old everyman who served as the focus for the Pokemon anime. As a 90s kid, that raspy, enthusiastic voice will forever be in the back of my mind.

Recently at RangerStop & Pop Con in Atlanta, GA, we had a chance to speak, and laugh, with Veronica Taylor about her time as Ash Ketchum, what she thought of Detective Pikachu, and another iconic role you may not have known about: April O’Neil from Teenage Mutant Ninja Turtles. If there’s one thing we learned in our time speaking with her and attending her panels, it’s this: Veronica Taylor is one of the kindest, most joyful and most genuine people in the entertainment industry. At her Sunday panel, she didn’t even sit at the “guest” table with a microphone. Instead, she pulled a chair down onto the main floor and formed a circle with those of us attending her panel as fans. Her first order of business? To speak to each person at the panel, asking where they were from and how they were enjoying the convention. At her booth she signed autographs and took photos with a genuine smile every time. She spoke with a gentleman with special needs for upwards of fifteen minutes as he shared his incredible knowledge of the original Pokemon anime; she listened and gave advice to another con attendee who was looking to break into the voice-acting world; and she laughed and made others laugh! No matter who, what, or how long, she was kind and genuine to every single person who wanted to meet her.

They say “Don’t meet your heroes,” but if Veronica Taylor is your hero, you need to meet her ASAP. And if she’s not your hero, meeting her just might change that.

Check out our full interview with her above, and keep an eye out for footage from her two RangerStop Atlanta panels!