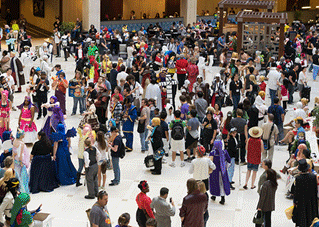 On the last day of Anime Weekend Atlanta last year, my friend and I were walking around the convention center, wondering whether it was time to call it a day and start on our long drive home, and a young woman called out to us. “Excuse me,” she said. “You gave my friend a rose earlier…” We’d been giving out small wooden roses to anyone who came up to us, and when she said that I got worried, because I had just given away my last one. But she said,

“My friend just got out of an abusive relationship, and what you did really made her happy. I just wanted to say thank you, because I don’t think cosplayers always realize the good they do.”

That’s still one of the most touching experiences I’ve ever had at a con. And it inspired a long conversation between my friend and me on the 7 hour road trip back to North Carolina about what exactly makes moments like that so magical. It has a lot to do with the character I was cosplaying that day. I was Tamaki Suoh from Ouran High School Host Club, the melodramatic and charming leader of an absurdly wealthy group of young men whose mission is–in short–to make women happy. He’s obnoxious and hopelessly out of touch, but as you watch the show you can’t help but fall in love with him.

It has even more to do with the suspension of disbelief, which is defined as “a willingness to suspend one’s critical faculties and believe the unbelievable; sacrifice of realism and logic for the sake of enjoyment.” It’s what allows us to enjoy a story about aliens or monsters or superheroes or anything else that doesn’t or couldn’t exist in the real world without worrying about how unrealistic it is.

There’s an air of fantasy and possibility anywhere that there are cosplayers. It’s not everyday you see people in elaborate armor or twinkling ball gowns just milling about. And for children below a certain age, there’s no disbelief to suspend. They rush excitedly up to princesses and hide from stormtroopers. To them, and to the very little girl who came up to me while I was Tamaki, wide-eyed and speechless as I showered her in compliments (her mother later told us that we’d made her entire con), we truly are the characters.

What fascinates me is everyone older than that–everyone who willingly abandons their fairly clear perception of us as young adult women in wigs and colored contacts and buys into the fantasy. We initiate this fantasy simply by being in cosplay. And when we respond in character, we extend that fantasy to them, inviting them to be a part of it with us. Of course, we all know it’s not real, but the emotional reaction is as genuine as it gets. When I gesture dramatically, spin around, clutch my heart and offer them roses, reciting my hopelessly cheesy bit about how each of them is the most beautiful creature I’ve ever seen, they usually short-circuit, blushing and stammering and giggling.

I was on the receiving end of one of these moments when I called out to a Professor Willow cosplayer at Otakon and jokingly informed him that I had like a hundred Rattatas I needed to give him (Pokemon Go was all the rage at the time). He surprised me and said “Ah! And I have candy for you!” and honest to goodness reached in his bag and pulled out a real piece of candy and tossed it to me and I think I giggled about that for the rest of the day.

Each of these moments exists in a bubble where the rules of reality are different. For a moment, however brief, we don’t see a cosplayer. We see the character, and the fact that you’re standing in a hotel doesn’t matter, and the fact that I’m clearly a girl (if my face doesn’t give it away, my voice does) doesn’t matter, and for a moment even the wooden rose is real. The same suspension of disbelief that allows us to enjoy unbelievable stories also kicks in when we interact with cosplayers. And when we, the people in costume, do what we can to keep the bubble from bursting, to allow that fantasy to reach the people who interact with us, we breathe life into the second half of the word “cosplay,” and, if we’re lucky, we make someone’s day.

This post is brought to you by Alyssa Knoll via Nerdy Minds Magazine! Alyssa is a cosplayer and blogger from North Carolina. When she isn’t sewing or hot gluing, she enjoys binge-watching weird Netflix shows, overthinking things, and making people laugh. She also never shuts up about the things she loves. Connect with Alyssa at @inelegantcosplay on Instagram, Tumblr, and Facebook, and @inelegantcos on Twitter!

Connect with Nerdy Minds on Twitter and Facebook for geeky news, reviews, deals, giveaways, and more! If you enjoyed this post, please share it so we know you want more like this or more from this author. If you, too, want to have your work featured on our front page, take a look around to make sure your idea’s not taken and submit it at www.nerdymindsmagazine.com/emailnerdyminds!