Edited 9/15: With the news of an upcoming Harley Quinn movie spinoff of DC Comics’ Suicide Squad (Margot Robbie has signed a first-look producing deal which includes a Harley Quinn solo movie), we feel another look at the craziness and awesomeness that is Harley Quinn is in order… When news broke in 2014 of DC Comics’ at the time upcoming Suicide Squad movie, there were mixed feelings on the first big screen incarnation of Joker’s slightly psychotic yet adorable girlfriend–who has by and large become a full-blown beloved character all her own! It seemed fitting that we reflect on just how far Dr. Harleen Quinzel has come by taking a trip down the Harley Quinn (crazy) memory lane with each awesome (and the occasional less awesome) incarnation of our (and Joker’s) favorite girl!

So without further ado, here’s a list of notable appearances from Harley Quinn. (Note: There WILL be some spoilers for Batman projects that have been around for a while now, but we’ll keep the approximately 5 years or newer content spoiler free…)

Let’s start with how we all fell in love with the neurotic yet charming girlfriend of the “Clown Prince of Crime”, her first appearance (voiced by Arleen Sorkin) in the Batman: The Animated Series episode entitled “Joker’s Favor”. In this episode, we find Charlie Collins, an accountant who runs afoul of guess who…the Joker. Pleading for his life, the everyman promises the Joker anything if he lets him go. Joker in turn makes Charlie promise to do him a favor. This memorable (aren’t they all?) episode serves as our first introduction to Joker’s new lovable and maybe a bit obsessed girlfriend/sidekick. Harley would go on to become one of the most stand-out characters in the series, making many appearances and capturing our hearts much like the Joker’s (as much as he tried to play it cool).

As Harley was becoming more and more popular in BTAS, someone at DC headquarters must have had a light bulb go off. Eventually Harley was introduced in the comics. The origin of the character was recounted in a 1994 graphic novel The Batman Adventures: Mad Love. Told in the style and continuity of Batman: The Animated Series, even written and drawn by Paul Dini and Bruce Timm (the producers of the animated series and the blessed men who created Harley), this comic revealed Harley’s origins as an Arkham Asylum psychiatrist who fell in love with the Joker. The story won the Eisner and Harvey Awards for Best Single Issue Comic of the Year. At first the “Mad Love” story was thought too violent for the animated series; it was eventually adapted in The New Batman Adventures series episode “Mad Love”. This episode and comic are pretty much infamous for what I like to call the “back-hand heard ’round the world”.

After a long reign in comics, Harley Quinn made a leap to live-action in the short-lived but inspired Birds of Prey TV series which aired in 2002-2003. She was played by Ferris Bueller‘s Mia Sara. In this series, Dr. Harleen Quinzel is a psychiatrist that Helena Kyle (daughter of Batman and Catwoman) is ordered to see. Unbeknownst to Helena or her comrades, Harley Quinn has been planning on seeking revenge on New Gotham for what it did to a certain “Mr J”. Her character was portrayed as far more ruthless and calculating in this world than in previous incarnations. 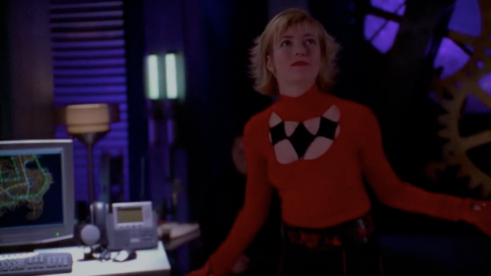 After a long run for BTAS, Bruce Timm and Paul Dini (and co.) brought us Batman Beyond, the tale of an old and retired Bruce Wayne who mentors an all new Batman for this futuristic Gotham. The direct-to-video feature, Batman Beyond: Return of the Joker, not only brought about the mysterious resurrection of the Joker and recounts the supposed “final” confrontation between Batman and the Joker, but an older Harley makes a small but enjoyable cameo as Grandmother to the Harley Quinn’esque twin thieves with the joint alias Dee Dee. Arleen Sorkin returned to voice the character alongside Melissa Joan Hart as Dee Dee.

Along with Harley continuing to appear in the comics and TV, she has also made appearances in video games. Harley Quinn was originally voiced by Arleen Sorkin in Batman: Arkham Asylum, and then Tara Strong stepped in for Batman: Arkham City, Injustice: Gods Among Us, and Batman: Arkham Knight. Since these games are still relatively new (within the last five or so years), we’ll avoid spoilers so you can enjoy them firsthand.

In 2011 DC Comics relaunched their comic titles and continuity with the New 52. Among them was the new incarnation of the Suicide Squad featuring our very own Harley Quinn among the team, sporting a new redesign of her character.

And finally we arrive at the second-newest incarnation of our (and Joker’s) favorite girl. It’s safe to say the fans lost their sh!t when we caught a from-behind glimpse of a blonde pigtailed prisoner and heard Tara Strong’s voice simultaneously (from a “Deranged Squad Female”) in an episode of the CW’s Arrow involving the Suicide Squad. Let’s call this “Deranged Squad Female” who she is: Harley Quinn was voiced by Tara Strong but physically portrayed by Cassidy Alexa. Could we potentially see a return appearance of Harley Quinn? Never say never, but always tell the show’s producers you want her back!

Back to the most recent Harley Quinn in DC Comics’ Suicide Squad film (2016), as portrayed by Margot Robbie. This marks Harley’s first time on the big screen, something that is long overdue. We only hoped (what’s the word for “more than hope”?) that she did the character justice… and without spoilers, fans insist she has!

And there you have it folks. A little trip down the Harley Quinn Crazy-Lane. Be sure and let us know what your favorite version or story of Harley Quinn is. There are so many to choose from already, and thankfully more to come! Oh, and as Dr. Harleen Quinzel might say, “Harley Quinn movie incoming!!! How does that make you feel???”

–This brought to you by Nerdy Minds Magazine and written by our very own Harley, Harley Ashley of Winder, GA.

One thought on “More Than Joker’s Girlfriend: Notable Incarnations of HARLEY QUINN”