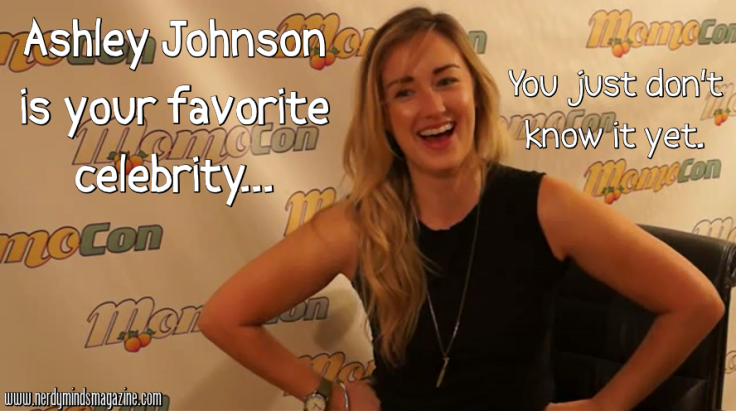 You may know her as the youngest daughter in Growing Pains or as Mel Gibson’s teenage daughter in What Women Want. If you’ve been around in the last ten or so years, though,  you’ve gotten to see her in a whole different light. She’s been in, count ’em, three Joss Whedon projects: Dollhouse, The Avengers, and Much Ado About Nothing; and she’s also the voice and motion capture actor for Ellie, the female lead in a little award-winning video game called The Last of Us.

What will really grab you, though, is how down to earth she is! Ashley Johnson isn’t some big-headed Hollywood hotshot who name drops and doesn’t have time for “the little people”. She’s “one of us” through and through, preferring the company of a video game or comic book over real-world interactions, and even getting a little star-struck when Captain America shows up. Lucky for us (and for you), though, she broke free from her solo nerdery to spend some time with Nerdy Minds Magazine at MomoCon. What came out of that meeting can only be described as magic, as she instantly became one of our favorite celebrities with this interview being one of our all-time favorites!

Check out the full thing below, and you’ll see more sides of Ashley Johnson than you ever knew existed. Sides we think you’ll particularly appreciate include her impressions of a few of the Whedonverse people she’s worked with.

So, with much ado about something, we present to you an interview with Ashley Johnson.

See, we told you she was your favorite!

Don’t forget to let her know you saw (and loved) her interview with Nerdy Minds. You can connect with her on Twitter via @TheVulcanSalute (what did we tell you about how she’s “one of us”, read: a nerd)? And please, for the love of Ashley Johnson, share this feature/interview!

Check out our other MomoCon coverage here! Expect to see more from us featuring Troy Baker’s other partner in crime, Courtnee Draper (Elizabeth from BioShock Infinite)! Stay tuned to Nerdy Minds Magazine on Facebook and @NerdyMindsMag on Twitter for more news, reviews, interviews, top 10s and geeky deals! You can even subscribe to have each new post delivered straight to your inbox so you’re sure you don’t miss out; simply scroll to the bottom of the page (yes, all the way down) and opt in! You won’t regret it! …and if you do, you can always unsubscribe. But we’re not worried: we know you’ll like what you see!

One thought on “VIDEO INTERVIEW: Ashley Johnson (THE LAST OF US, THE AVENGERS) Is Your Favorite Celebrity… You Just Don’t Know It Yet”