Going to New York Comic Con is a lot like going to see a critically acclaimed, well-hyped foreign movie: Stuff happens that you didn’t think would happen, things that you do expect don’t actually happen, and you leave the whole experience a little bit broke, kind of confused, fairly exhausted, but glad you went.

Since this was my first time taking an offspring of mine – in this case my older child, the 5-year old Juban Princeling – to Comic Con, I felt all those things times a million. And I think he felt them, too. Except for the “broke” part because he’s 5.

The Princeling and I dressed in costumes, me as Codex from The Guild because Felicia Day was going to be at Comic Con, and my child as The Flash because he’s obsessed with running fast.* My husband did not dress in costume because he is too stoic and boring for that sort of thing, though I made him wear his Darth Vader “World’s Greatest Dad” t-shirt so he wouldn’t embarrass me.

When we arrived at Comic Con Sunday morning, we spotted someone in full Darth Vader costume before we even got in the door. Like, FULL. At this point, I might let it be known that the Princeling is obsessed with Darth Vader. This is how we watch Star Wars in my house:

Me: “Which one, Darth Vader or Anakin Skywalker?”

Me: “Darth Vader chasing Luke Skywalker in space, the one with the snow monster, or Darth Vader taking off his helmet?”

Princeling: “The one with the snow monster where Darth Vader puts Han Solo into that brick.”

If you read that and thought, “Oh, Empire Strikes Back. Good choice,” then we can be friends.

When he was nearly 3 1/2 and before his baby brother was born, my parents gave the Princeling his own Darth Vader costume. He wore it for meals, to bed, and going out in public. For four months, I forgot he even had clothes.

So he saw Darth Vader, and this must be what it’s like when other, non-geeky children of non-geeky parents go to Disney World and get to meet Mickey Mouse. His little eyes lit up, his little body trembled with barely-contained excitement, and his little voice rose in pitch with glee. If Comic Con Darth had pulled out a real red light saber I think my kid would have fainted.

Unfortunately, the Princeling has not yet mastered the art of having his photo taken with characters in costume; also, he is 5 and still thinks they are all real. So the photo I got of my oldest child, my first born, my Star Wars soul mate at home, the photo I will keep forever of him at his first Comic Con with his lifelong hero, is one in which he looks like we are forcing him to eat cold creamed spinach.

Much of the rest of the day passed in a similar fashion: The Princeling getting jumping-up-and-down excited to see the Teenage Mutant Ninja Turtles, a Power Ranger, a Transformer, and several superheroes of both the DC and Marvel variety, but the photos I have on my iPhone roll look like the increasingly torturous Stations of the Cross. 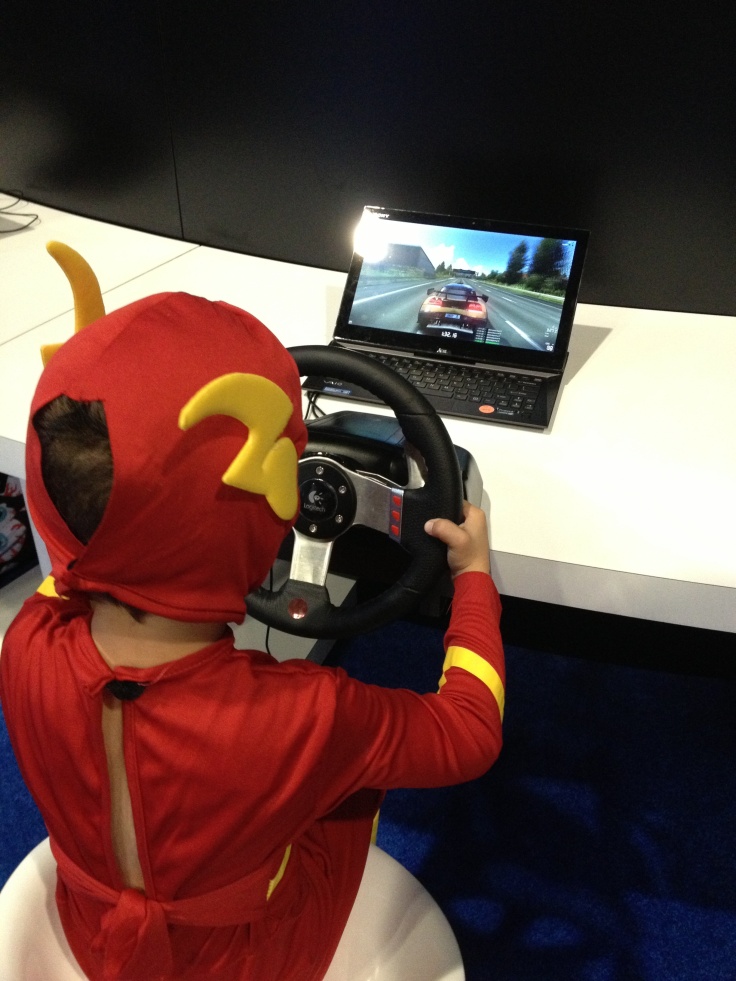 There are also more toys than a thousand landfills could hold for a thousand years. This was important because the Princeling’s birthday was last week, and the gift I got him – some light-up bricks that make a motorcycle – was a total dud because he wanted to play with it and it is only meant to be built and then looked at. I felt badly about this so I told him he could get a replacement birthday gift at Comic Con. And he did! He got a Transformer motorcycle that fell apart as soon as we got home! Hooray for toys!

Even grown-ups meltdown by the end of Comic Con (if you doubt me, check out the legions of geeks crapped out on the floor of the showroom in tribe-like clusters, hoarding their energy drinks and baskets of chicken fingers), and the Princeling was no exception. After several hours even I kind of wanted to cry from over-stimulation. But my kid’s first Comic Con was still a smashing success. How do I know this? He’s already talking about his costume for next year. Surprisingly, it’s not Darth Vader.

*While I do identify as a feminist, I still wore this Codex costume to Comic Con. I don’t think women should feel they have to dress sexy, and you will certainly never ever catch me in a Slave Leia costume, but since Felicia Day** was going to be there anyway, I thought it fine. Next year, though, I’m definitely going as a Browncoat.

**Did not get to meet Felicia Day. Like a newbie, I neglected to get in line 2 hours in advance so that by the time I got to the autographing area, her line was approximately 10,000 people deep. Also: $25 for an autograph. Sorry, Felicia Day. Next time.

Have you taken your kids to a Con yet? We want to know your experience!

Why People with Small Children Won’t Survive the Zombie Apocalypse