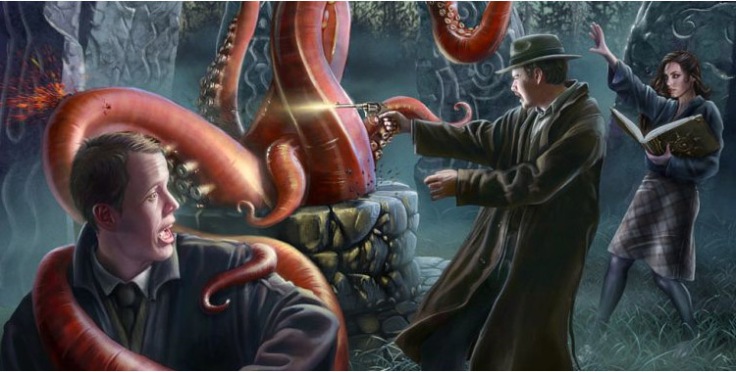 Halloween is fast approaching. Do you have plans for that night? If you find yourself in a gaming mood (and really, who among us doesn’t?), here are 5 fun games you can play to celebrate Halloween! There’s a choice for you whether you’re alone or with friends, with only a little time before your big plans or with plenty of time to kill!

1. Alone, with plans for later:

A timed, single player board game published by Games Workshop in 1987.  You have exactly one hour to save the city of New York from a malevolent entity bent on dragging the city through a dimensional rift (for leisurely consumption, one may assume). The time limit creates an intense single player experience, and the game is very difficult but not impossible to win.

The print version is out of print, and you can expect to pay a lot for a used copy on eBay or Amazon (if you can even find one). It has been adapted for iOS, Android, and PC. For the digital version, you have the option to select among three different levels of difficulty (easy, medium, and hard), just in case you are looking for a more casual or hardcore game experience.

The first of two games in this list that originate in the world of Call of Cthulu, Arkham Horror is a board game originally published by Chaosium and more recently by Fantasy Flight Games. The year is 1926, and the players are investigators looking into unnatural events plaguing the city of Arkham, Massachusetts. The investigators’ ultimate goal is to close the gates to other dimensions opening around the city; if enough portals open, an Ancient One (think horror incarnate) awakens. The investigators must fight and defeat the Ancient One or it will devour the world.

In the words of one reviewer: “Arkham Horror is like an interesting nightmare that you might have after watching some really peculiar and scary movies…” The game nails the tone of Call of Cthulu. Although it is not an easy game to pick up and play, we don’t know many gamers who have let thick rulebooks stand in their way – nay, some of us relish them!

And although you may find you have an easier time holding back the forces of madness with friends, the game is playable by one player. Some solo players have controlled more than one investigator at a time; others tried it with one. It is possible! Bonus: there are plenty of expansion packs available for when your friends want to join in!

3. In a small group, with plans for later:

Zombies!!! is one of our favorite board games of all time, and we have spent many evenings enjoying the zombie apocalypse with a few friends. The story is simple: Zombies are all over the city, and there is only room for one person in the last helicopter leaving town. The objective is to be the first person to get to the helicopter and escape, leaving everyone else to fend for themselves amongst the never-ending hordes of flesh-eating corpses. During the game you have to balance covering ground toward where you hope the end objective will be with the need to search for supplies and ammunition so that you can survive the journey. The layout changes every time because the board is actually a deck of square cards. Each player places a section of the board at the beginning of his or her turn, and the helipad is always toward the bottom of the deck. Individual zombies don’t pose much of a threat, but enough of them will overwhelm and kill you. You can’t directly attack other players, but you can play cards that put them in a more difficult position. Expect a game of Zombies!!! to take about two hours, but the setup time is very brief, so that two hours is almost all play time. If you really love Zombies!!!I, you will be happy to find that there have been numerous expansions published, adding additional areas to fight through and multiple possible avenues of escape. And more ways to die, of course.

And check out how many expansions there are!

*Although, the number of players should be any number your game master (“Keeper”) can handle. An additional side note: There can even be only two players total – one Keeper and one player: there are two published “solo” modules for CoC: “Alone Against the Dark” and “Alone Against the Wendigo”.

Call of Cthulhu is a tabletop roleplaying game (RPG) unlike any other. Inspired by the works of H.P. Lovecraft, the tone of Call of Cthulhu is one of grave danger, hopeless terror, and an inevitable slide into death and madness. Oh, and it’s lots of fun, too! Your character’s role is usually that of an investigator seeking to uncover deep, dark mysteries surrounding strange events in the world in an effort to hold back the inevitable destruction by unknowable beings of great evil just a little bit longer (see the entry for Arkham Horror above). Yes, we are using the word “inevitable” rather frequently: unlike games like Dungeons and Dragons where your characters are heroes that travel the world vanquishing monsters, in Call of Cthulhu, you are lucky to survive an encounter with a monster. If you do survive, that is probably because you ran away and someone else ran a little bit more slowly. The fun of Call of Cthulhu isn’t about becoming a more invincible bad-ass; it’s about experiencing indescribable hair-raising encounters with the unknowable, sitting at the edge of your seat hoping that what pitiful resources you have are enough to make it through a few more moments of terror, and finding amusing ways to roleplay through your inevitable bouts of psychosis. Don’t plan for a Call of Cthulhu game to be over in a few short hours. An adventure can take several sessions of four or more hours of play to complete, but it is well worth your time.

Call of Cthulu is wildly popular (for good reason): the newest edition of the game (7th Ed.) was just funded through a Kickstarter campaign this summer. They met 1404% of their goal!

If you’re interested in learning more about the Call of Cthulu game and setting (and there’s loads to learn!), check out the excellent Miskatonic University podcast, founded by our friend, Keeper Dan!

Start with your local gaming store!

If you can’t find it there, try here!

Although the picture shows a card game, you do not need to buy anything to play this game! “Werewolf is a simple game for a large group of people (seven or more). It requires no equipment besides some bits of paper; you can play it just sitting in a circle. I’d call it a party game, except that it’s a game of accusations, lying, bluffing, second-guessing, assassination, and mob hysteria.” (source) Sounds great, right? Your group is split up into two groups: villagers and werewolves. One person serves as moderator, two as the werewolves, and the rest of the group as villagers. The moderator begins the game by passing out cards (or slips of paper) on which is written “Villager”, “Werewolf”, or “Villager: Seer” (we’ll get to the Seer in a bit). In the “night” phase of the game, everyone covers their eyes (“Go to sleep”). The moderator allows the Werewolves to open their eyes (“Wake up”) and choose who they will “kill” that night. The Werewolves indicate silently to the moderator who their targets are, then close their eyes again. The moderator allows the Seer to open his or her eyes and to choose someone else in the group. The moderator will silently indicate to the Seer whether that person is a Werewolf or a Villager.

The next phase of the game, daytime, is when the real fun begins. Everyone may open their eyes (“Wake up”). The Villagers try to figure out who among them they should lynch for being a Werewolf. The Werewolves are allowed, even encouraged, to lie to save their hides. The Seer probably doesn’t want to outright reveal that he or she is the Seer, for fear of being the Werewolves’ next target come nightfall, and so should subtly steer the Villagers’ wrath. Once the Villagers choose to lynch someone, night falls and the cycle begins again.

Where to buy: Unnecessary!

We hope this has helped you flesh out your Halloween plans a bit. Whether you’ll be bobbing for apples or through zombie swipes, we hope your Halloween celebrations will be killer.

What games will you be playing this Halloween? Maybe we left out something killer? Let us know in the comments!

This post has been brought to you by CK Wright & Clifton Wright!

***The views expressed above are that of the author and do not necessarily reflect the opinions of Nerdy Minds (Magazine) as a whole. But they might.***

We’d appreciate a vote below (we’d most appreciate 5 stars, but of course we want you to be honest)! We encourage commenting, conversation, debate, and an overall community atmosphere here, as well as on our Facebook and Twitter pages; it’s important to us that we know what you like (and what you don’t like) so that we can continue to give you more of the things for which you’re nerdiest (that’s right… grammar is important)!

Contact us to let us know what’s on your nerdy mind!

New content Monday-Friday (& some weekends too)! If you enjoyed this feature, we encourage you to stick around awhile! You can start by checking out our newest features and the ones about which we’re nerdiest! Like us on Facebook & follow us on Twitter to make sure you’re alerted to the upcoming awesome features from the nerdy minds behind Nerdy Minds!