Remember those cool painted Star Wars helmets that showed up last year?  Remember thinking they would be even cooler if they were shoes?  Well wait no longer!  Coming to a Lexington Comic Con near you is this year’s presentation of The Shoe Project, ten pairs of Vans shoes, each designed by a different artist.

“The Shoe Project came from a desire to bring something special to Lexington Comic Con and to really help our fund raising efforts for UK Children’s Hospital,” says Tyler Phillips, the man behind the project.  He also admits that it wasn’t entirely his idea.  He tells us that his wife came up with the idea while he was working hard to think of a new project.  Yes, we know this perpetuates the “Women And Shoes” stereotype, but once you see the shoes you’ll realize that these are more than just fashion accessories.

From a legal perspective, though, this seemed like a nearly impossible feat at first.  Not only would the Star Wars license need to be granted, but also the Vans shoes would have to be provided as well.  What seemed like a daunting task, though, turned out to be much easier.  Tyler tells us that when he contacted Lucasfilm, they responded quickly and with much enthusiasm and support.

Soon, Tyler was in possession of ten pairs of brand new white Vans.  But who would do the art?  Tyler and his wife made a list and went about contacting the artists.  “We had a tremendous response from artists all over the country and even some international artists,” says Tyler.  “We chose the artists who would bring a great mix of styles to each pair of shoes.  Some have painted their shoes, some have used special dyes, some have used inks, and some have transformed the shoes into awesome non-wearable displays.”

By now you’re wondering where you can see these amazing shoes.  They will be on display this weekend at Lexington Comic Con before they are auctioned off to benefit the UK Children’s Hospital.  Make sure you keep an eye on The Star Wars Shoe Project Facebook Page as there are more shoes to be revealed as well as links to the auctions after the shoes finish their stay at Lexington Comic Con.  In the meantime, check out some of the designs below! 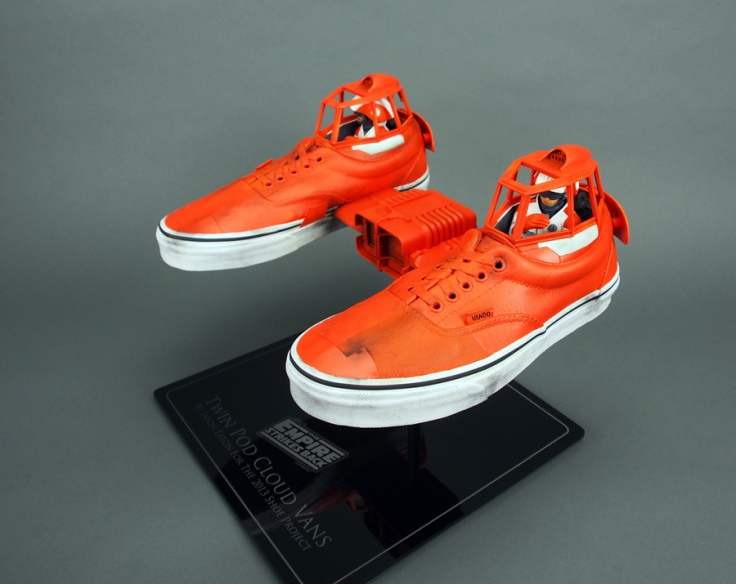 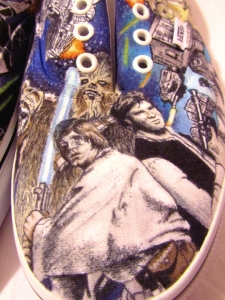 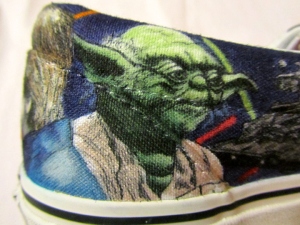 As usual, keep up with Nerdlyweds and Nerdy Minds on facebook!