Gilmore Girls is over, again, and there’s a void in us all that can’t be filled with today’s television; yet we find ourselves asking, “Do we even want more Gilmore Girls?” While the obvious answer is YES!, we wouldn’t be doing the Rory Gilmore in all of us justice if we didn’t put pen to paper, proverbially, and compile a good old fashioned Pros & Cons list. Of course, the big flashing in lights pro for more Gilmore Girls is more Gilmore Girls!, but a serious con to consider is this: “if it ain’t broke, don’t fix it.” Leave well enough alone.

Gilmore Girls had a very successful run originally, with a reasonably satisfying ending – Rory finally got her crap together and got the dream job she didn’t know was a dream job, following Barack Obama as a journalist on his campaign trail, literally being offered on a silver platter the chance to report, up close and personal, on some of the biggest news in her country – in our country! Watching it leading up to the Netflix revival, nine years later, revealed just how big of a deal this was – our little Rory was on the campaign bus for OUR PRESIDENT (he is still our president, OKAY?)! And possibly more importantly, the Luke and Lorelai shippers among us got our long awaited reconciliation after Luke stays up all night sewing together – with fishing line – one thousand raincoats so it wouldn’t rain on Rory’s send off – which he planned and executed, solo and in secret, telling Lorelai upon her discovery of this that he just likes to see her happy… and the curtains closed on a kiss (not really, but you get the idea).

Fast-forward nine years, and Netflix gives us more of what we love in Gilmore Girls: A Year in the Life; this isn’t a review article, but our three-words-or-less review is “YES THANK YOU!” A Year in the Life wraps with our O.T.P., Luke and Lorelai (suck it, Christopher), tying the knot (finally) in Lorelai’s very own Wonderland (designed by Kirk), followed by the quintessentially not tied up in a pretty 1perfect bow Gilmore Girls ending with those #FinalFourWords in which Rory drops some major news… “Mom” “Yeah?” “I’m pregnant.”AND SCENE. We were given as much if not more of a satisfying ending in A Year in the Life than the original, and we have to ask ourselves, is it wise to tempt fate a third time?

PRO: That cliffhanger though!

Amy Sherman-Palladino, the show’s creator, has said she knew how the series would end from the beginning, that the final four words were planned before the first episode was even filmed. We have to ask, then, did she plan to have a sequel series, or did she truly intend for us to all eternally wonder what was going to happen after Rory dropped the “I’m pregnant” bomb on her mother in the show’s final scene? Lauren Graham (Lorelai Gilmore), when asked if the show could continue, responded with a shrug and, “The ending was a bit of a cliffhanger, don’t ya think?” YES WE DO THINK!

CON: Let Luke and Lorelai be happy, darn it!

Luke and Lorelai have been through enough (Christopher and April, for example…) – let’s let them have their “happily ever after”, okay?!?

PRO: The next generation of Gilmore Girls (or boys)

The #FinalFourWords left us with a whole new life story to tell – Rory’s own little Rory (assuming she continues in her mom’s footsteps of naming her baby after herself)! Will she be BFFs with her daughter (or son), too, or will they have a more standard mother-daughter relationship? And Luke and Lorelai were in talks of their possible “fresh baby”, even looking to the great (the crazy) Paris Geller for surrogacy help! While they ultimately decided they didn’t need her help right now, there are still talks to be had and possible fresh babies to acquire.

The absence of the late, great Edward Herrmann in A Year in the Life was handled remarkably well, or at least as well as it could be considering the circumstances. The sense of loss of such a great character (and actor) was shown in all of the characters Richard Gilmore had known, and it wasn’t a one-and-done nod to him either – his storyline spanned episodes, and he was present even in his absence. Sadly, all of the actors have aged since the original series ended, and if the show were to continue then we would certainly have to bid farewell to more of the characters (and their actors) we have come to know and love through the years, from Emily Gilmore to Taylor Doose to Miss Patty and Babette. Since Stars Hollow and Gilmore Girls is really so much more than just Rory and Lorelai, would we really want the show to go on without these beloved characters.

Emily Gilmore’s snobbery was a staple of the original series. While it was as present as ever at the beginning of A Year in the Life, there was definitely a new side of Emily that we got to see throughout the 4-episode arch. She went from a socialite housewife to a loving caretaker who is thrilled by eccentrically telling about, and acting out, whale hunting at a local museum. One can only imagine how this “new” Emily would interact with the residents of Stars Hollow now!

Kirk has always been a fan favorite, and his new pig companion, Petal, complemented his wacky ways as the perfect addition to his family. Of course Kirk would dive head first into pet pig ownership – thanks to the great people of Stars Hollow who pooled their money together to buy Petal and hopefully deter Kirk and Lulu from having a human baby (Kirk as a dad is something no one, most of all Kirk, is quite ready for). The hilarity that would ensue when Kirk realizes that his “mini pig” is actually a farm pig and is going to weigh upwards of 300 pounds would be glorious, because of course Kirk would never in a million years part ways with Petal, even after she outgrows and eats everything in Kirk and Lulu’s home. Kirk would be the perfect example of a pig dad, because that’s just who Kirk is. 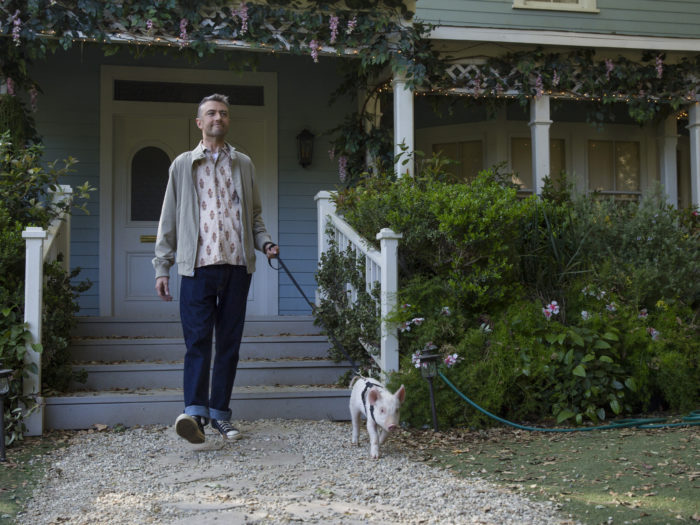 The return to Stars Hollow in A Year in the Life made it clear that Jess still cares for Rory in a more-than-just-friends kind of way. Regardless of whether or not you were Team Jess when he first showed up (we were Team Dean), he has matured a great deal over the course of the series, and the man he’s become, who we see towards the end of the original Gilmore Girls and throughout A Year in the Life, could be a great man for Rory! He’s the kind of man who won’t “play nice” and sugarcoat things and who will help make sure she gets back on track to doing what he knows she is capable of; after all, it was his inspired idea that she pen the book telling her and her mother’s life story, appropriately titled Gilmore Girls. But how would Jess react to the news of Rory’s baby? The series made it clear he was not fond of Logan, so how would Jess respond upon discovering the baby is his? Does Rory still have a place in her heart, romantically, for Jess, or are his feelings one-sided?

We definitely aren’t saying that Rory needs a man to complete her story – and Gilmore Girls always made sure we knew that the women in Stars Hollow are much more than what guy they’re with – but that doesn’t discredit the fact that the “Who will Rory and Lorelai end up with?” question was a consistent one throughout the series. Lorelai’s “Will they, won’t they?” storyline has come to a close, at long last; and now, perhaps, it’s Rory’s turn. If nothing else, she can continue on her journey to who she wants to be, and who she wants to be with…

What do you think? Should Gilmore Girls continue after A Year in the Life? Have pros or cons to add? Let us know on Facebook or in the comments, and we may add it to our list and tip the tables in your favor!