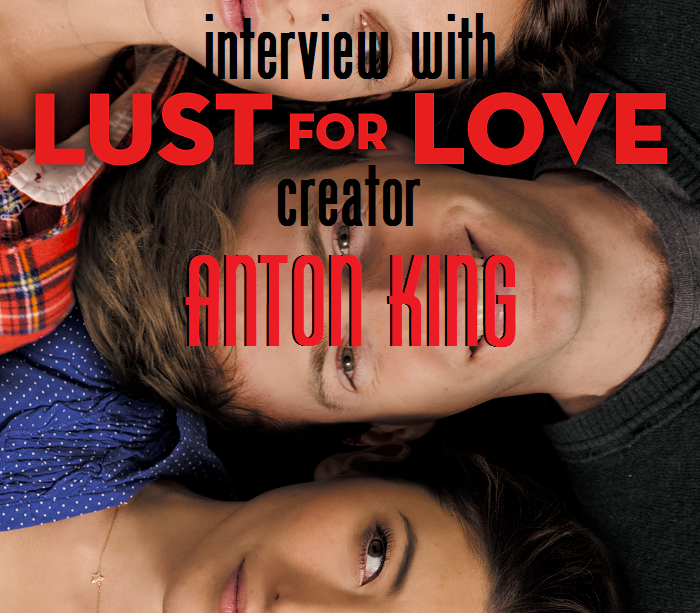 Remember the movie Hitch starring Will Smith? Now instead of Will Smith, picture the cast of Joss Whedon’s Dollhouse and think back to all the things you loved, and hated, about your college/dating years. Lust for Love is all that, plus a whole lot more.

This “rom-com” (romantic comedy) reunites the talented cast of Dollhouse (Fran Kranz, Dichen Lachman, Miracle Laurie, Enver Gjokaj), and the roll-over chemistry with this group is immediately evident. With the addition of Beau Garrett (Tron: Legacy), Kaitlin Stasey (most recently in I, Frankenstein), Karim Saleh (Iron Man 2), and the exciting cameos delivered by geek goddess Felicia Day (Dr. Horrible’s Sing-Along Blog, The Guild) and Whedonverse writer Maurissa Tancheroen (Dollhouse, Agents of S.H.I.E.L.D.), this movie is, at least actors-wise, a goldmine for fan-boys (and -girls) everywhere! Serious props to the casting director on this one.

Fran Kranz is Astor, an awkward everyman with whom many nerdy minds can relate. (We know this because we relate.) Lust for Love opens on Astor whose “happy tenacity [has just spoiled] his one chance at love with his lifelong crush Mila (Beau Garrett). Convinced he needs more experience with women to win her back, he engages her ex-best friend Cali (Dichen Lachman) to teach him how to woo women. Together they dissect his failings, and Astor makes his awkward pick-up attempts. As Astor begins to juggle multiple opportunities, he discovers the source of the rift between Cali and Mila, and the trio are forced to confront their conceptions about love.”

If you haven’t seen the Lust for Love trailer yet, why don’t you go ahead and do that (below)? We’ll wait.

This thing is highly anticipated! We know that because many nerdy minds paid to have it made via Kickstarter back in 2011. It’s been a long wait, and the wait is almost over! Well, Nerdy Minds has seen the film, and we’ve also scored an interview with creator Anton King (below). So prepare yourself for some Lust for Love awesomeness! Hopefully it will help you to tough out the rest of the week (the official release date is February 7th).

We’d be lying if we said the Whedon fan-boy/girl inside us didn’t give us a pre-conceived optimism going into this film. But far too many “let’s watch this because [favorite actors A, B, and C] are in it!”s have proven that favorite actors don’t always make favorite movies. We are relieved to report, however, that this is not the case with Lust for Love, as it is both well-acted and well-written!

Enjoy an audio clip from our interview with creator Anton King below, and we’ll re-cap below that to give you all the juicy details!


Some of the Q&A’s from our interview can be read below.

Did you draw on any personal experience for Lust for Love?
My brother and my good friend used to have a lot more success with girls than I did, and there came a point where I said that didn’t make sense. I was more shy than them, but I forced myself to not be as shy, and that led to a lot of awkward circumstances.

So you were Astor?
Well, I wouldn’t like to say that, but I have had some similar experiences. And obviously, Fran’s character likes birding, and I’m not a birder, but Jack Wylson–one of the producers–is a birder, so I learned about birding through him. We went downtown and saw those birds the year before we shot it just as something to do, and we decided to put that in the movie. So yeah, I definitely took things from different things I’ve experienced.

We can’t help but notice that there are quite a few Whedonverse actors in the mix–Dollhouse specifically. We’d love to hear about your involvement with that. We know you mentioned “Remains”. Can you tell us about your casting process and your relationship with them?
Well, I met the Dollhousecast through Dichen. I’ve known her a long time. When we were casting the movie, we just cast our friends. I guess we hadn’t been in LA that long. You know, obviously the Dollhouse cast was good friends that we liked and all great actors. So we cast a few of them, and we also cast a number of Australian actors we liked and knew as well. You know, in my mind it’s a mix of Dollhouse actors and Australian actors…but people just sort of see it as the Whedon actors. Of course, Joss casts good actors, and most every actor he casts knows how to give a really genuine performance.

How about the non-Whedon actors? Did you know them as well, or how were they brought into this project?
Beau Garrett was a friend of Fran’s, and that role took a little longer to cast. And then Karim Saleh, the French-Lebonese actor, is a very good friend of Dichen’s, and I just wanted to have him in there. He’s always funny in real life anyway. He always gets cast in all these serious roles, but I think if people realize how funny he is, his career might really take off. Then my sister’s in the movie–she has a scene there. And Kaitlin Stasey I’ve known for years as well. She’s a wonderful, natural actress, so it made sense to cast her.

Was it obvious on set who had worked together before and who hadn’t?
To be honest, everybody knew everybody on set before. Except for Beau who was new, but she gets on with people easily. She has a lot of fun on set, so it was good times on set for sure.

Were these specific actors always who you had in mind to play these roles, or did you ever have different actors in mind or these same actors just playing different characters?
When I wrote the script, a little bit sometimes I had people in mind, but really I sort of cast it with Dichen. It also depends on the schedule. Maurissa’s role was going to be  bigger but she was sick at the time so I had to change it to a smaller role. And you know, Maurissa doesn’t act that much because she’s always writing, but I’m a huge fan of her acting. Sometimes when you watch a movie you can’t always tell what people are like to work with, because maybe the performance has been brought out in the edit, but there are certain actors–and there are a lot of them in Lust for Love–where every take is great and you can use, and Maurissa is one of them, even though she’s not seen as often.

You said Maurissa was sick. Is that why her voice is kind of missing in the movie?
No, that was just–When I was writing that scene, I just wanted to have a different character. I thought that might be amusing, and she played it well. It was hard for the sound mix, but I think it worked.

Dollhouse fans will get to see some of these actors playing sort of polar opposites of the characters they played in Dollhouse? Was that a conscious decision?
I know a lot of actors, and I think actors get sort of pigeonholed in different areas because they’re known professionally for the work that they do, but if you know them socially, then you know what they’re capable of. I mean, I’m not sure if Enver for example has had many significant comedic roles, but he loves comedy and makes little comedy things himself and he is a huge talent. I just know these actors are capable of doing different stuff for sure.

A name like Lust for Love kind of leaves something for your imagination to play with, but we noticed there was a lack of nudity, which is sort of prevalent in indie-type films. Was that a conscious decision on where that line was?
I mean I like nudity in films if it’s in the right context, but I’m not sure if nudity would have fit with this movie. I don’t think it fit with the sensibility. Also when you’re doing a tiny movie like this, these actors took a risk in me; I’m a first-time director, our budget was tiny, and so they took a risk being in this movie. To extend that risk to also say, “and we want nudity,” that would have been too much to ask, and it wouldn’t have been appropriate for the movie anyway.

One of the big scenes in the movie takes place at what we assume is a Halloween party with all the costumes. How did you decide on these particular costumes? Was there a theme you had in mind or did you sort of just pull things out of a closet?
Astor’s dog collar costume was one I wore two Halloweens before we shot–I was late to a Halloween party, didn’t have a costume and saw an old lampshade, and I was thinking that maybe I could use that as a wizard hat. Then I realized that it would work better as a dog collar, and so I put on my brown shirt, which Fran also wears in the movie. And Dichen had that other brown thing that he was wearing. Then Beau’s costume I saw in one of the other actress’ Facebook pictures, so I sort of stole that.

During our chat with Anton, we learned a few more things, which we’ll sum up for you (below).

Speaking of costumes, one particular costume choice stood out to us above all the others. We haven’t seen something like it since Pump Up the Volume, so we asked Anton to tell us about his decision to include a giant functional…phallic costume (no, we’re not kidding). The short answer? “That was just some guy who had a penis…costume.” They went to the West Hollywood Halloween Costume Carnaval with Fran and got a lot of footage of him interacting with different people in costume. “So that was just some guy who had a penis costume.” We also mentioned that while we are ultimately happy with how everything turned out, we couldn’t help hoping that Astor would end up with one character in particular (portrayed by one of our favorite actresses–we won’t tell you which, as to avoid spoilers)…to which Anton replied that this character was an intentional red herring, meant to make us want that. Well done!

So long story short, it turns out that Anton King is friends with Dichen Lachman, and Anton and Dichen went through the casting process together. “We just cast our friends.” Ultimately this friendship is what we have to thank for Lust for Love. Well, let us be the first to say that we’re glad you have such awesome friends, Anton (not to mention a little jealous)!

Lust for Love will be available to the public on February 7th (so soon!) on VOD and iTunes, so do yourself a favor and pre-order here!

Got more questions or comments on Lust for Love? Let us know in the comments! And be sure to share this post to spread the word on the awesomeness that is Lust for Love.

You can keep up with Lust for Love by liking them on Facebook and following them on Twitter. To find out about another Fran Kranz film (also starring Amy Acker), check out our interview with Lord of Catan writer-creator Stuart Paul. To see yet another Dollhouse reunion featuring Miracle Laurie and the Dollhouse imprint chair, check out our Miracle Laurie/Christopher May interview from Dragon Con! For even more awesomeness to feed your nerdy mind, you can like Nerdy Minds on Facebook and follow Nerdy Minds on twitter! You can even subscribe to have every new Nerdy Minds post delivered straight to your inbox (recommended)!