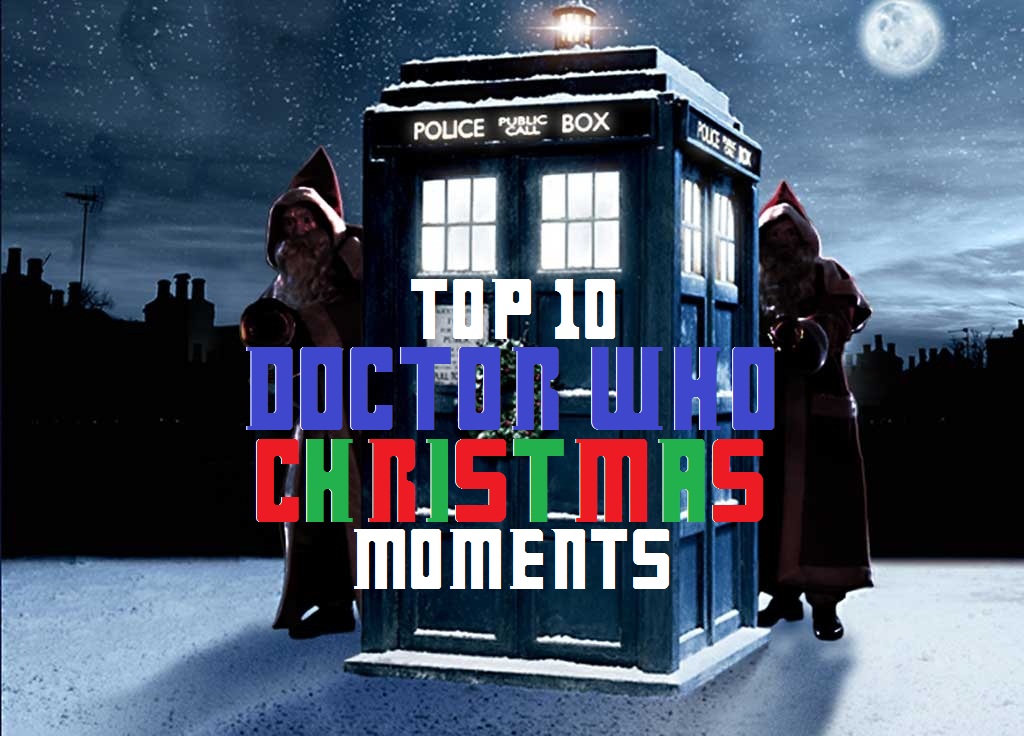 Christmas: An awkward time of year full of murderous Robot Santas, alien invasions and multiple regenerations… Oh wait. That’s just for The Doctor. Man, he must love the festive season (!). But, if it wasn’t for The Doctor, Earth would automatically become a quivering mess in anticipation of inevitably disastrous, outer space shenanigans as soon as that fateful clock strikes midnight on 25th December. Or, worse, it wouldn’t exist.

Luckily though, thanks to The Doctor and the Companions that dotefully follow him throughout all of time and space; facing life, death and snowy peril (along with his ever-faithful fans), the human race is safe – year upon year – to enjoy stuffing our bellies with explosive quantities of turkey & chocolate (not together, of course), arguing over endless games of Monopoly and falling asleep by mid-afternoon in front of the TV. Hooray for The Doctor!

So, to celebrate, let us count down the Top 10 Doctor Who Christmas Moments and show that compassionate alien, with one too many hearts, how grateful we truly are for his protection.

As our Doctor lands his TARDIS in Christmas Eve 1851, he overhears some startling cries for help and encounters a man, with his companion Rosita, frantically chasing after a Cybershade and calling himself “The Doctor”. Who is he – a future incarnation of our Doctor, suffering from amnesia – or a victim of the Cybermen encroaching robotically upon Victorian England? At this point, we do not know. What we do know, however, is that “The Next Doctor” – played by the charismatic David Morrisey – claims to have a TARDIS (“Tethered Aerial Release Developed in Style! Do you see?”) and a Sonic Screwdriver. But, hang on, it just looks like a run of the mill, rusty, Victorian screwdriver… Bit of a down-grade, no? “It makes noise. [taps screwdriver against wood] That makes it sonic.” In the words of number 10 – “Brilliant!”

Picture the scene: a devastated Doctor has just lost his one true love and best friend Rose Tyler in a parellel universe, never to see her again, due to the destructive antics of the Daleks and Cybermen. A runaway bride (Donna Noble) mysteriously materialises in the TARDIS Console room, and a giant spider – the Racnoss – is hell bent on reawakening her eight-legged brood of billions to take over Earth for their own. As ever, The Doctor saves Earth and kills the enemy but, this time, it’s his Companion that has to stop him from taking his own life with it – begging him to run from a flooding under-layer as the Empress of the Racnoss dies. In a rare, touchingly meaningful, moment of vulnerability, The Doctor – having made it snow – offers her a place next to him in the TARDIS but Donna refuses (what!?), asking him to promise her one thing: “You’ll find somebody… Because I think sometimes you need somebody to stop you.” Wow. What has become of our lovely alien?

Having defeated The Master (sort of) and once again saved the Earth, The Doctor’s Tenth Regeneration meets his end sparing the life of Donna’s elderly Gramps. With time to spare before he changes, The Doctor ties up a few loose ends and says some heartfelt goodbyes to the old faces he loves the most – some of which will never even remember him. The most upsetting of all these goodbyes, the one that never ceases to make me curl up in a corner and cry for at least four days at a time, is his final farewell to Rose Tyler; at a place in her life before she knew anything of his existence and just looks over him as a strange, drunk man who’s going a biT mad. With love and regret in his voice, his last words to the woman he adores – who he has lost forever – are: “I tell you what, I bet you’re going to have a really great year!” Now, excuse me whilst I sob relentlessly like a child…

No-one understands loss and needs company like The Doctor. So, after walking the Earth in icy solidarity and utterly grief-stricken, for we don’t know how long, following the death of The Ponds by The Weeping Angels (boo!), The Doctor excitedly invites Victorian Governess Clara – after considerable resistance – to join him in his travels. Much to his (and our) dismay, Clara falls to her death – under The Doctor’s care. But before she sadly slips away (another tear-jerking moment in Doctor Who history), she gives him a message: “Run, you clever boy, and remember…” It’s not until he comes face to face with her gravestone and her full name “Clara Oswin Oswald” that he finally realizes “something impossible”. He has met her before, in the future, and the journey to find “The Impossible Girl” begins. Exciting!

The Titanic in space, a centuries-old head on a golf cart and Kyle Monogue. What could possibly go wrong? Well, let’s not break the Christmas habit of 12 lifetimes, Doctor… Someone has to die! Unfortunately for pint-sized Miss Monogue, it’s the dutiful Astrid, saving The Doctor from Capricorn, who falls helplessly to her death as The Doctor is forced to merely look on. Once again responsible for the unnecessary death of an innocent, The Doctor is confronted with a freak of technology – the “Ghost” of Astrid – who, after kiss her goodbye and finding peace, frees her with the words, “You’re not falling, Astrid; you’re flying.” He truly is damned! Can’t the guy (and his female followers) catch a break once in a Christmas while? Doubt it. 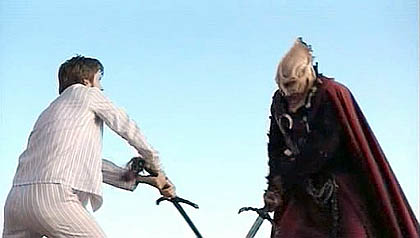 The festivities of 2005 not only gave us an alien invasion from the aggressive Sycorax, but also the first full episode from the amazing David Tennant – Tenth Doctor – as he gets to grips with his new regeneration. Spending most of the episode unconscious and leaving Rose to muddle through saving the Earth pretty much single-handedly until the very last minute, the new and improved Tenth Doctor challenges the lead Sycorax to an epic sword fight on a mountain top, losing one of his hands in the process. Thanks to residual regeneration energy, he grows his hand back and, in an extraordinary moment of Doctor silliness (!), off-set by a dangerous backdrop, Ten finds his trademark cheeky and unequaled wit with the line, “This new hand, it’s a fightin’ hand!” in a more than ridiculous American accent. Ever the charmer, Ten! 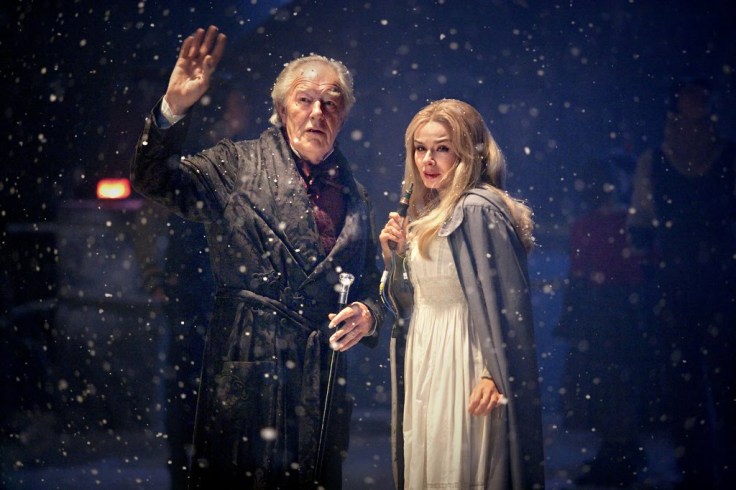 Doctor Who does Dickens (again). But on another planet. With flying Sharks. And Katherine Jenkins. Mind = blown. Yes, boys & girls, Whovians & those with Nerdy Minds, “A Christmas Carol” is nothing less than truly beautiful and genuinely emotional. Abigail’s Song, written especially for Jenkins in this episode, comes nearing the end of a doomed love story between a young Kazran (our “Scrooge”) and Abigail (Jenkins) who has been cryogentically frozen as security for a loan and, as the story unfolds, we find she had an incurable disease upon entering cryostorage, meaning they can only enjoy one last Christmas together; spent helping The Doctor get back to Amy and Rory through the flying Sharks. Yeah, that’s essentially it. It’s complicated. Anyway, Jenkins sings this poignant, fervent piece with such attentive sensitivity, even a Cyberman would struggle to remain unaffected. Dickens would be proud. 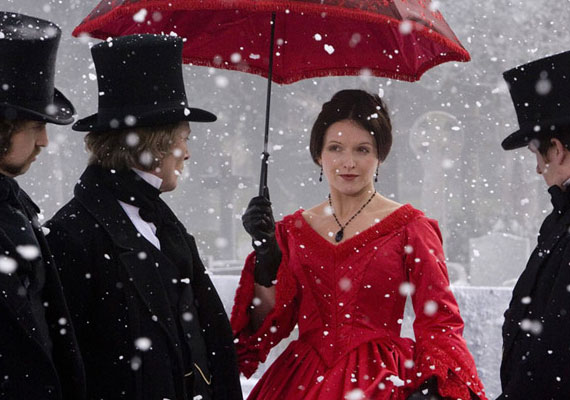 Doctor Who’s female antagonists tend to be hideously manipulative, awe-inspiringly powerful, intelligent beyond comprehension, and none of them more so than Miss Hartigan; a woman whose heart, body and mind is dead-set on becoming the Cyberking and who will stop at absolutely nothing to achieve that…until, of course, The Doctor defeats her. Heh. Before that defining moment, however, comes another; a moment that warrants the term “jaw-dropping” for sure. As several middle-aged men gather in a graveyard for a funeral, dressed head-to-toe in black and standing, mournfully, against a pure white, snowy background, Miss Hartigan – no expenses spared – storms in wearing a stunning (in more ways than one), traditionally Victorian, poofy, bright red dress and leads them, bemused and terrified, to their sticky Cyber-fate. Forget the killer little black dress, it’s all about the killer big red one now. Watch out, boys! 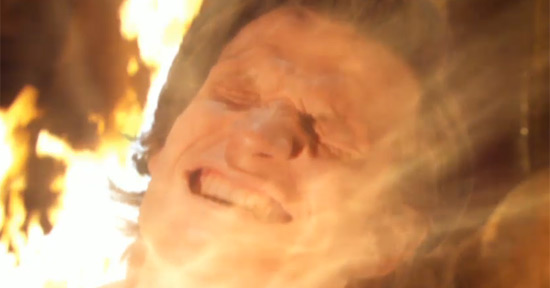 Everything has its day. Everything has to come to an end. Everything dies. No-one knows this better than The Doctor. After four glorious years of hair-raising and heart-melting adventures in time and space, the gorgeous Number Ten gave way to Chinny Eleven in one of the saddest moments in Doctor Who history. Tearfully declaring “I don’t want to go”, The Tenth Doctor’s body explodes with regeneration energy and his face painfully changes into one, at that point, we’d never seen before. Our Doctor, the compassionate alien we trusted with our very lives for so long, becomes a stranger once more. Little did we know what gems of utter greatness Eleven would give us. 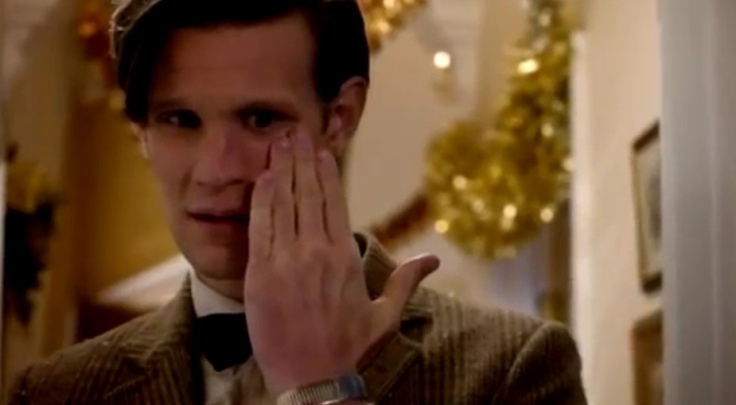 Matt Smith, the Eleventh incarnation of The Doctor, is an incarnation I feel particularly attached to, just as basically every single other Whovian out there; we all think Matt Smith is amazing! So, after the hardships experienced in world-war-torn Britain, bringing a merry Christmas to a single family who had otherwise lost their father and husband in battle, we want him to experience a little “Christmas cheer” of his own! Wish fulfilled as he is welcomed into the long-awaiting arms of his best friends Amy and Rory – after 2 years away – who proudly tell him they always set a place for him at Christmas time (just in case). Overwhelmed by the love they casually and instinctually bestow upon him, The Doctor – our Eleventh – sheds tears of joy. The likes of which have [possibly] never been seen before. Aw. Bless him!

In summary, The Doctor’s Christmases are, more often than not, filled with death and pain and lots of crying but, hey, without him Earth would be pretty screwed. So, here’s to The Doctor – May he experience many painful Christmases to come (and the odd good one, too. I mean, we love the bloke, and all his faces) – just so we can enjoy ours! A very merry Christmas to one and all (but not to The Doctor. Okay. Sometimes to The Doctor)!

What’s your favorite Christmas moment (Doctor Who or otherwise)?

Top 10 Things We Love About Doctor Who Villains Past &Present

Doctor Who’s 50th (The Day of the Doctor): 4 Key Revelations + What They Might Mean

One thought on “Top 10 Doctor Who Christmas Moments”