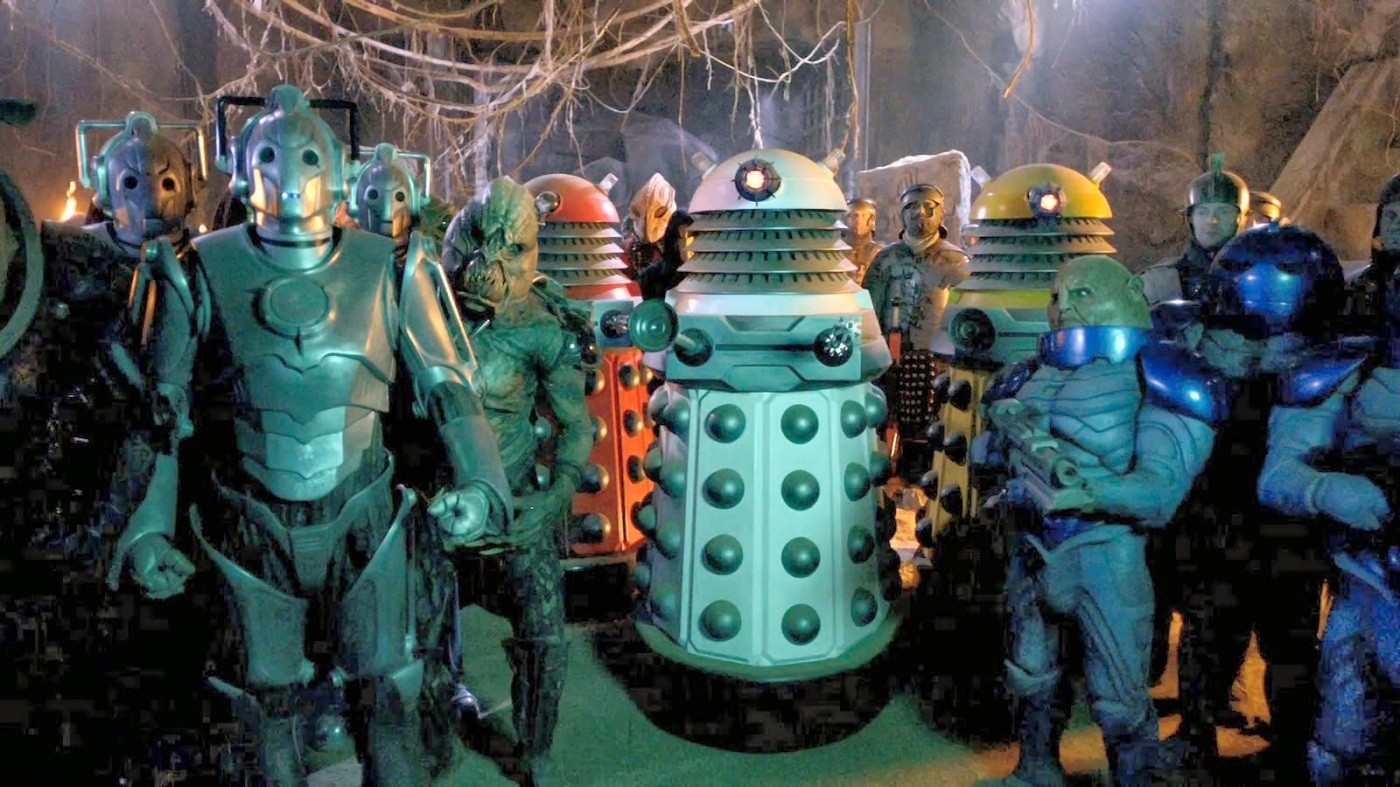 No relationship joyfully celebrates its golden anniversary without having experienced a few ups and downs along the way, and no relationship understands this better than that between The Doctor and his ever faithful fans.

Let’s face it; we’ve endured 50 years of cardboard sets, dodgy acting skills and a break longer than even Ross & Rachel could’ve recovered from. But, for all this, Doctor Who is still going strong and, embraced in the loving arms of Whovians across the world, will continue to delight and unite generations for years to come – hiding behind sofas and marveling at the grotesque intensity of the unique absurdity that is the Doctor Who Villain, both past and present.

“So”, I hear you ask, “what top ten things do we love about Doctor Who Villains past and present?”. Well, I’m particularly pleased you asked – lovely Nerdy Minds readers – because, I am about to tell you…

10) The Names. Yes, I know. This point sounds a little too dull and obscure to make it onto a “top ten” list but, trust me, Doctor Who‘s Villains’ names are anything but obscure and ever a source of laughter. With it’s dark themes – such as loss and grief – and complex storylines, I sometimes forget that Doctor Who was originally made for children. Until I hear the obvious, simplistic names of its Villains such as: “Abzorbaloff” (“Love & Monsters”, 2006) – a creature that absorbs other living creatures into its body by touch – or “BOSS” (“The Green Death”, 1973) – a megalomaniac supercomputer able to brainwash human kind; oh Doctor Who, how very sophisticated – pushing the boundaries of the capabilities of the human vision since 1963 (!).

9) The Costumes. Most relevant to Classic Who, the Villains’ costumes are probably one third of what makes the series iconic. I mean, who can forget the utter abomination of fashion that was burnt onto our innocent eyeballs such as that worn by The Valeyard – “Trial of a Timelord” (1986) – (come on, there’s far too much glitter on that neck-line) or the super-sexy, S & M throw-backs that were The Rani’s high-waisted, 1980’s threads. This said, however shameful or kinky, sparkly or dull, the costumes worn by each and every Doctor Who Villain, across the years, epitomize the imagination of every single one of us who ever to have given momentary – or obsessive – thought to the question: “I wonder what’s really out there?”

8) The Melodrama. Obvious it may be, but its cheesy greatness is still worth mentioning. Hammy, stage-esque acting isn’t something that died along with the 1960’s as actors became accustomed to the different techniques needed for TV. No. And thank God. Without melodramatic, hammy, stage-esque acting we wouldn’t have the preposterous yet timelessly wonderful performances from all those who were lucky enough to play The Master, right through to his last regeneration as John Simm. Although I still can’t work out if John Simm played his part with hammy acting genius (as usual) or comic, childish ridiculousness. I’ll get there one day.

7) The Minions. Ah. Not those animated, yellow weirdos we all love to laugh at on that film there. No. Those usually disfigured, brainwashed lackies of sub-human intelligence that slump around the place causing more trouble than being of help to their otherwise super-genius keepers… But wait. What about The Cybermen? The Daleks? The Host? In so many ways, Doctor Who continuously excels itself, and this is one instance. Unlike so many pieces of fiction, the antagonists’ minions are – more often than not – more threatening, more evil, more driven by the urge to kill than their rulers, thus making all antagony so utterly terrifying, I’m surprised any child in the country can sleep on a Saturday night. I can’t.

6) The Technology. Max Capricorn was a head on a golf-buggy, Miss Foster had a Sonic Pen, Miss Hartigan had that giant (and I mean GIANT!) Cyberman robot thing… There are so many impressive (and not so impressive but equally as charming) bits of kit to choose from. Whether they’re there to destroy, aide disability, ease pain or just mock the Doctor – making him struggle that little bit more – Villain tech is always awesome and a little bit shocking. Davros always freaks me out a bit, anyway.

5) The Gender Equality. Traditionally the world of business is ruled by the patriarch, and TV is no different. TV is for depicting men stabbing other men in the back, despairing in the consequences, cavorting around doing manly things and going back to their unsuspecting wives in time for dinner. Right? Wrong, at least when it comes to the adventures had in all of time and space. Just look at The Rani, Miss Foster, Miss Hartigan, Shakespeare’s Witches, Cassandra… The list is so long! They may be the antagonists and therefore seen as evil, but the female Doctor Who Villain is almost always strong, intelligent and gives The Doctor a bleeding good run for his money! Girl power. Or something.

4) The Scare-Factor. All Villains are pretty scary but Doctor Who‘s always seem to go that little bit further and pry on the deepest, darkest, childhood fears we all harbour, suppressed in what we hoped was the ‘unlockable box’ at the back there – bringing them more vividly to life than our child-selves ever could have imagined. Autons, both their past and more recent incarnations, are nothing but hideous; the Broken Dolls in “Night Terrors” still send shivers up my spine, no matter how many times I see them. They’re simply terrifying. But that’s why we love them.

3) The Relatability. Love to hate, hate to love; it doesn’t matter how vile, ridiculous or melodramatic a Villain is, what makes Doctor Who‘s nothing less than brilliant (“Candyman”, 1986, excluded) is the undeniable fact that we can understand and relate to their motives, no matter how far away in the universe they come from. The Rani, for instance, just wants somewhere to conduct her experiments in peace; we all have a crazy ex still hanging around in the distance, trying to stop us from achieving what we want… Don’t we, Doctor!? Awkward.

2) The Relentlessness. Those pesky kids (!) just don’t give up. After 50 years on TV and thousands in Doctor-time, the Doctor’s antagonists just won’t give up until he’s run out of regenerations. They’re not lazy, that’s for sure, and no matter what the Doctor does, where he runs or how he destroys 99.9% of any given evil race, The Cybermen, The Daleks, The Sontarans… Every single creature that the Doctor has ever slightly annoyed will just keep coming after him and after him and after him. You can run, but you never can hide.

1) The Twist in the Tale. That’s right. The final and most epic of things we love about Doctor Who Villains past and present. The thing that, no matter what, never fails to make me cry (well, it’s not hard)… They turn the Doctor’s name and reputation from purely good to desperately evil. The Doctor – through all of space and time – comes to mean “The Destroyer” over “The Healer”, damaging and negating every act of goodness and saviour the Doctor has ever bestowed upon another living creature. Not only this but also making the Doctor essentially responsible for the death and loss of some of his closest Companions. Yeah, think about that…

So, basically, Doctor Who Villains are AWESOME – past, present, hammy, cheesy (like a toasty), laughable or just a little too glittery, they are superior to so many others – throughout all of time and space. Man, I’m glad I’m not the Doctor. Although I do wish I was Rose. Rose is cool.

What are your favorite things about Doctor Who Villains? If you’d like to see more like this or from this author, let us know that, too.

got a nerdy mind? Write about it! Take a look around to see what we’re about, and contact us with your ideas! You can also keep up with us by following @NerdyMindsMag on Twitter and liking Nerdy Minds Magazine on Facebook!